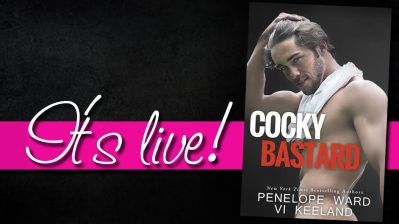 He was someone who belonged in my wildest fantasies instead of a rest stop in the middle of Nebraska.

A sexy, cocky, Australian named Chance was the last person I expected to run into on my cross-country drive.

When my car broke down, we made a deal. Next thing I knew, we were traveling together, spending sexually-tense nights in hotels and taking unplanned detours.

My ordinary road trip turned into the adventure of a lifetime. It was all fun and games until things got intense.

I wanted him, but Chance wouldn’t make a move. I thought he wanted me too, but something was holding him back.

I wasn’t supposed to fall for the cocky bastard, especially when I knew we’d be going our separate ways.

Vi Keeland is a native New Yorker with three children that occupy most of her free time, which she complains about often, but wouldn’t change for the world. She is a bookworm and has been known to read her kindle at stop lights, while styling her hair, cleaning, walking, during sporting events, and frequently while pretending to work.  She is a boring attorney by day, and an exciting smut author by night!

Penelope Ward is a New York Times, USA Today and Wall Street Journal Bestselling author. She grew up in Boston with five older brothers and spent most of her twenties as a television news anchor, before switching to a more family-friendly career. She is the proud mother of a beautiful 10-year-old girl with autism and a 9-year-old boy. Penelope and her family reside in Rhode Island.

Other books from Penelope Ward