I should have resisted him, but I couldn’t. My addiction to him was all-consuming, the high from his touch unlike any other.

Without him, I couldn’t focus, couldn’t think, couldn’t breathe.

With him, I hated myself for being too weak to fight the devil himself.

And Tyler Burnham was the devil.

He lied to me.

But he loved me. And he still does.

Unable to stop thinking about the man who deceived her, Mackenzie Delano struggles to move on with her life and forget that Tyler Burnham ever walked into her life. But she still aches for him, despite his betrayal. Her mind is at war with her heart, a war that could be the difference between living and dying.

Tyler Burnham is lost without Mackenzie. As he contemplates the meaning of everything, he tries to find a way to prove that his feelings for her are true. That he would walk through fire to keep her at his side. That he would sacrifice it all…his career, his fortune, his life…to protect her.

The truth is, he may just have to…

Recommended for readers 18 & up due to strong language, explicit sexual situations, and graphic violence.

This is the second book in a two-book duet, which must be read in order. If you have not yet read Chasing The Dragon, please start there. 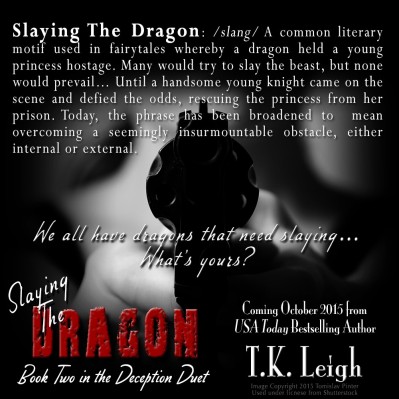 ALSO AVAILABLE IN THE DECEPTION DUET
#1 Chasing The Dragon – 99c

“Wait, Mackenzie!” Tyler cried out after me. “Tell me what you want me to say and I’ll say it! Letting you walk away from me once was the biggest mistake of my life. I won’t do it again.”

I spun around just as I was about to open the front door. “You let me walk away from you?” I hissed, my teeth clenched.

“That’s not what I meant.” He ran his hands through his dark brown hair and I could see the desperation wash over him. “What I meant to say is all the lies, all of it… I’m so sorry I put you through it. But do you think I regret any of it?” His eyes grew more intense and impassioned, his chest heaving as he poured his heart out to me. “Not for a second.”

I glared at him, waiting for him to explain.

“If it wasn’t for all the lies, for my assignment, I never would have met you, so I’m not going to say I regret a fucking second of any of it. I don’t care what it takes to win back your heart. You can push me away all you want. You can tell me you’ll never forgive me, that there will never be an us again, but I will always come back for you. A hundred times. A thousand times. I will fight for us until I take my last breath.”

He stepped toward me, grabbing my hand in his, caressing my knuckles in such a delicate way that made me want to melt into a puddle.

“Please, Mackenzie…” He leaned toward me, brushing his lips against my forehead, kissing me so delicately, so lightly. “Serafina,” he whispered, “tell me what it will take and I’ll do it.”

Despite everything he had just said, I simply couldn’t let him back in. Relationships were based on trust, and Tyler took my trust and used it against me. I couldn’t forget that, no matter how much my skin yearned for his touch.

“You want to know what it’s going to take?” I asked softly, freeing my hand from his grasp.

He nodded, nervous anticipation radiating through his body as he looked at me with eager eyes. 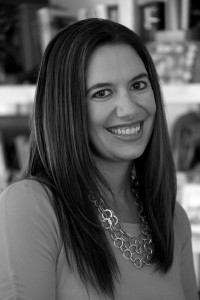 T.K. Leigh, otherwise known as Tracy Leigh Kellam, is the USA Today Best Selling author of the Beautiful Mess series. Originally from New England, she now resides in sunny Southern California with her husband, dog and three cats, all of which she has rescued (including the husband). When she’s not planted in front of her computer, writing away, she can be found running and training for her next marathon (of which she has run over fifteen fulls and far too many halfs to recall). Unlike Olivia, the main character in her Beautiful Mess series, she has yet to qualify for the Boston Marathon.

T.K. Leigh is represented by Jane Dystel of Dystel & Goderich Literary Management. All publishing inquiries, including audio, foreign, and film rights, should be directed to her.

He’s trying to protect his heart…
She’s a shell of the girl she once was…
Can he chase away the demons threatening to destroy her?

Mackenzie Delano craves control. After tragedy strikes during her freshman year of college, she compensates for the helplessness she felt by micro-managing every aspect of her life, from her business life to her social life…to her love life. But she wasn’t expecting to cross paths with a mysterious man who seems to invade her every thought.

Tyler Burnham has been living his life with one rule in mind…never fall in love. Focusing solely on his career, he is able to remain a detached observer of life… Until a case is dropped in his lap, forcing him to form an intimate relationship with a sharp-tongued woman in order to obtain the location of a man deemed an enemy of the State.

When Tyler finds himself falling for Mackenzie, will he be able push his feelings aside and recover the information he needs? Or will he put the mission and their lives at risk to follow his heart?

Chasing The Dragon is the first installment of a two part series of deception and betrayal where nothing is as it seems.

***Note – Chasing The Dragon is the first book in a two-book duet and is a spin-off of T.K. Leigh’s USA Today Best Selling Beautiful Mess series. It is not necessary to have read that series in order to read this duet, but it will contain a mild spoiler from the third book in the Beautiful Mess series, Gorgeous Chaos.***

T.K. Leigh, otherwise known as Tracy Leigh Kellam, is the USA Today Best Selling author of the Beautiful Mess series. Originally from New England, she now resides in sunny Southern California with her husband, dog and three cats, all of which she has rescued (including the husband). She always had a knack for writing, but mostly in the legal field. It wasn’t until recently that she decided to try her hand at creative writing and is now addicted to creating different characters and new and unique story lines in the Contemporary Romantic Suspense genre.

When she’s not planted in front of her computer, writing away, she can be found running and training for her next marathon (of which she has run over fifteen fulls and far too many halfs to recall). Unlike Olivia, the main character in her Beautiful Mess series, she has yet to qualify for the Boston Marathon.