Jake Wilson is a very successful tattoo artist in California. He lives his life on the go and there’s not a shortage of women at his disposal at any point in time. His life is perfect for a man who has no desire to commit and the stories he could tell you would either terrify you or have you intrigued and hoping to become his next treat. What happens when he meets the first female to challenge him?

Dani Green is a very successful club owner who has just recently relocated. Her partnership with Jax Wilson brings her face to face with Jax’s twin brother Jake. His sexy charm won’t work on her because she sees right through his intentions. What happens when Jake is determined to break through her sophisticated demeanor and show her his true personality? Will she fall for his wild existence or will she be the one to leave him always wanting more? 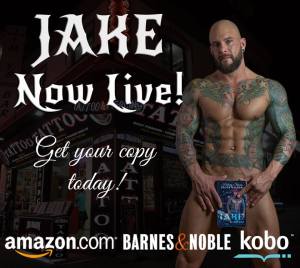 Hilary Storm lives with her high school sweetheart and three children in Enid, Oklahoma. She drives her husband crazy talking about book characters everyday like they are real people. She graduated from Southwestern Oklahoma State University with an MBA in Accounting and has a full time job as an accountant. Her passions include being a mom, writing, reading, photography, music, mocha coffee, and spending time with friends and family. She is the author of the International Best Selling ‘Rebel Walking’ series. Book one: ‘In a Heartbeat’ was released June 2013, Book two: ‘Heaven Sent’ was released in September 2013. Book 2.5: ‘Banded Together’ released Jan 2014. Book 3: ‘No Strings Attached’ released March 2014. Book 4: ‘Hold Me Closer’ released May 2014. Book 5: ‘Fighting the Odds’ is due to release Oct 2014!     Facebook | Webpage | Twitter 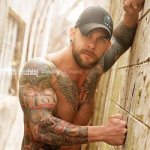 Jacob Wilson was born in Joplin Missouri and still resides there.  He loves his bulldogs and treats them as if they are his children.  He is a nationally qualified NPC physique competitor/fitness model.  After appearing on numerous Hilary Storm covers and traveling together they decided to write their first book together.  Jake, is Jacob’s debut novel.       Facebook | Twitter

Determined to make his latest preservation project on Route 66 a success, Connor Gibson will take any good press he can get. Even if it means spending a week with a reporter. And even if it’s one from a publication he has good reason to hate. Connor certainly isn’t expecting a spontaneous and undeniably attractive blonde who makes him seriously hot for the press…

Charlize Beckett is in deeeep trouble. This is her one chance to prove to her publisher dad that she’s a serious journalist, even if she has to pretend she’s someone else. Worse though, is trying to maintain any objectivity with the way too charming Connor. She can’t help but get into all kinds of sexy trouble with him. But by going off the record, Charlie is putting both her reputation and her heart on the line…

When not attached to her laptop, USA Today Bestselling Author Robin Bielman can almost always be found with her nose in a book. A California girl, the beach is her favorite place for fun and inspiration. Her fondness for swoon-worthy heroes who flirt and stumble upon the girl they can’t live without jumpstarts all of her story ideas.

Writing is a dream come true, and she still pinches herself to be sure it’s real. She cherishes her family and friends and loves to connect with readers. Get the scoop on Robin, her books, and sign up for her newsletter on her website at www.robinbielman.com

Date, Mate, Fate: Celebrity Edition
The reality show like no other: Eight men, eight women, one mansion in paradise; their every move caught on camera for the world to see. Among the faces in the house: a mysterious cowboy, a cocky football star, a motocross god, and a broody Alpha calling all the shots.
Thorough compatibility testing says everyone’s soulmate is there. Computers’ abilities are boundless, but can they be trusted with matters of the heart?
Would you recognize “the one” when you saw them?

S.E. Hall is the author of the Amazon Best Selling Evolve Series, Emerge, Embrace, Entangled (novella) and Entice as well as the bestselling stand-alone NA Romance, Pretty Instinct. She has co-written Stirred Up, Packaged and Handled, a collection of erotic short stories with her CP and friend, Author Angela Graham as well as a collaboration titled Conspire, a romantic suspense with friend and author Erin Noelle. She is honored to be a part of the USA Today and NYT Best Selling Devour box set. S.E., which stands for Stephanie Elaine, resides in Arkansas with her husband of 18 years and 3 beautiful daughters of the home, and one married daughter who graced her with two beautiful grandchildren. When not in the stands watching her ladies play softball, she enjoys reading and writing and the occasional trip to the casino. She’s also clutch at Baggo, when it’s warm outside, and definitely the woman to pick on your side for some Flip Cup!

Angela knew she found her calling in the world of fiction the moment she began pounding away at the keys for her first short story in 2012. With a baby on her shoulder, she wrote for about a year before deciding to try her hand at an actual novel. It was the best decision she ever made and since then she continues to bring characters to life in her free time. 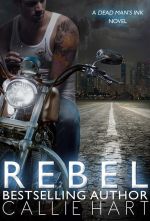 Book One in the Dead Man’s Ink Series. This book contains strong ties with the Blood & Roses series, but you do not have to have read those works in order to read this one. Rebel is a contemporary romance story with occasional dark themes that some people might find confronting.

Sometimes, you don’t mean to become another person. Sometimes the choice is made for you, and pretending is the only thing that keeps you going. When Alexis Romera is taken and her kidnappers find her fake ID in her purse, she must become Sophia in order to keep her family safe. Revealing her real identity to the man she’s sold to would be easy enough, but can she trust him? Hell bent on revenging the murder of his uncle, Rebel doesn’t seem all that interested in playing things safe.

In fact, nothing about the secretive, dark and brooding MC president seems safe at all.

What do you do when the man who raised you is murdered, and the only witness is kidnapped girl who’s being sold as a sex slave? You buy her, of course. As president to the most powerful motorcycle club in America, Rebel isn’t lacking in power. There are strings the man can pull, and entire criminal organisations and corporate businesses alike would fall to their knees. However, along with such power comes intense interest. The DEA have their eye fixed solely on the MC…and they’re just waiting for Rebel to trip up.

Getting Sophia to testify is the only way to bring the Los Oscuros cartel down. The beautiful, dark haired, dark eyed woman is belligerent and uncooperative and unlikely to bend to his will, but Rebel has a few tricks up his sleeve to make her compliant–he’ll charm her until she’s bending over backwards to please him.

Of course, falling for her might cause a few hiccups along the way… 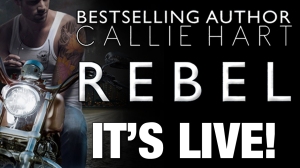 Callie has experienced many changes throughout her life, and gone through many ups and downs that have all worked towards shaping and molding her into the person she is today: fun loving, active, social, and hard working. The only thing that has remained a constant throughout her life is writing. Creating characters who will tear your conscience in two is a favorite pastime of Callie’s. There are few real saints and sinners in her books; more often, the denizens of her stories are all very human. Broken, flawed, and always with the potential for redemption.

Despite the subject matter being markedly hot and heavy in comparison to the stories she wrote in elementary school, there will always be an element of fairytale to her work.