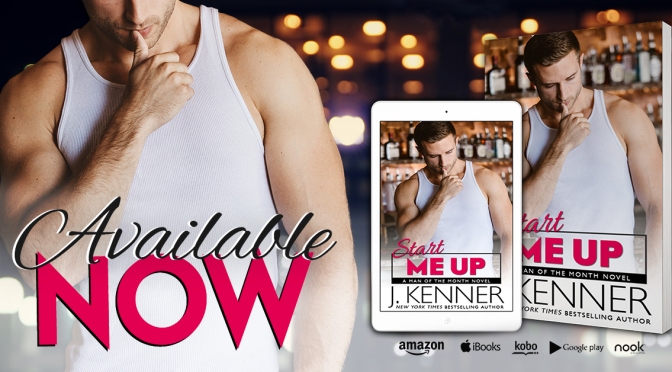 Start Me Up, the newest standalone in the Man of the Month Series by #1 New York Times bestselling author J. Kenner is LIVE!

A high school drop-out with only his twisted sense of humor and panty-melting good looks going for him, Nolan Wood has turned a small radio gig into a thriving career.

Now a local celebrity, Nolan never wants for female companionship. But he never gets too close. And he damn sure never lets them see the man—or the pain—behind the jokes.

Then a one-night stand changes everything.

Career-focused, goal-oriented, and buttoned-down accountant Shelby Drake isn’t the kind of woman who’d usually catch Nolan’s attention, but her soft mouth, hidden curves, and deep sensuality blow his mind. And after only one taste, he wants more.

But Shelby wants nothing more to do with him. And now the radio playboy is on a sensual mission to convince her that opposites really do attract.

Her pleasure is his passion.

Each novel in the series is a STANDALONE romance with a guaranteed HEA!

Start the Series of Standalones Today!

Her books have sold over three million copies and are published in over twenty languages.

In her previous career as an attorney, JK worked as a clerk on the Fifth Circuit Court of Appeals, and practiced primarily civil, entertainment and First Amendment litigation in Los Angeles and Irvine, California, as well as in Austin, Texas. She currently lives in Central Texas, with her husband, two daughters, and two rather spastic cats.