Duke of Manhattan by Louise Bay
My rating: 5 of 5 stars

I became a Louise Bay fan after reading King of Wall Street. Since then I have fallen madly for each of whom I’ve dubbed her Big Apple Hottie. Each male character has made my panties melt with the confidence and power they just ooze. Their alpha tendencies head my blood and each book has provided me with a rush that just turns me on.

All that said, Sam nor Max held a candle to how much Ryder affected me. Maybe it was the British accent. That alone would cause my undergarments to instantly desintegrate. Maybe it was his cool and calm demeaner that just screamed sexy without him even trying. Or maybe, just maybe it was the passion he had for his company and the love he had for his family and that he was willing to do the one thing he swore he’d NEVER do to save it all; which turned out to be the best thing that could have ever happened to him.

Ryder wasn’t looking for love. He enjoyed the variety of women that have been around all his life. He loved sex too much to settle for just one woman his whole life. But being around Scarlett was so easy that his usual facade would practically disappear (just like my undies). The transformation in Ryder was so gentle yet exponential. He was always a good guy, but Scarlett made him that much better.

Scarlett was such a tough cookie all on her own. She’s had a failed relationship and the only thing she loves is her company. It’s become her purpose and helped her move forward after her hearbreak. She holds just as much passion for her company as Ryder does which is a shared trait that adds to their connection and is why they were both willing to go along with the agreement.

What I loved so much about this couple was that things were so easy with them that they never really had to pretend when it came to affection. It was all so natural that they had to remind themselves that it was all fake but they were only kidding themselves. It was obvious to everyone else how NOT fake things were between them. They were just so freaking cute.

I can’t NOT mention their steamy moments. Those two had some seriously nuclear level heat between them. That bedroom action was H.O.T!… but I’ll leave it at that so you can find out for yourselves.

This was such a great book and I can’t wait to ready more from this author.

FAVORITE QUOTES:
The memory of her face, her hair, her body – it had all stayed with me in a way that I wasn’t used to. It was almost as if we’d known each other longer than just a few hours. She’d touched me like she knew me.

If I was going to fake-marry someone, I could have done a lot worse. Scarlett King was clever, beautiful and f*cking fantastic in bed.

“Clean enough?” I slid my food from his hand, braced my hands on the side if the bath and stood. “Because I want to get a little dirty.”

F*cking Scarlett King was my new favorite thing to do. The more sex we had, the better it got – and it had been pretty damn good to start off with.

“Whatever it is that you’re afraid of, I’ll stand between you and it my whole life,” he said.

I’d never have a problem kneeling before my duchess, but there’d never be a time when I wasn’t in charge when it came to her orgasm. 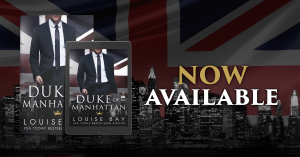