ABOUT THE BOOK
Signing with Brighthouse Records was supposed to be everything we ever wanted—our better life. Our chance at everything we never had but always wanted. All our dreams would finally come true and we were on top of the world.
It was our chance at the happiness we never had in life.
Our every desire was at our fingertips and the power of that feeling was all consuming. But then it took every dream we thought would come true and it slapped us in the face with the cold hard reality.
Dreams were just that…something that floated on the cusp of untouchable, taunting you with every graze of your fingertips before slipping even further away.
Happiness…that feeling is a joke.
In the end it became painfully obvious that each of us would always have each other, but we would forever be alone.

Jaded Hearts will kick off the Loaded Replay series – which will be a series of interconnected standalones. The cast and crew of Jaded Hearts was introduced to us for the first time briefly in Unexpected Fate. You do not need to read that book in order to fully enjoy Jaded Hearts. Happy reading!

Jaded Hearts was a wonderful start to Harper Sloan’s new series, Loaded Replay. An alpha security expert and a fiery, feisty rockstar… What more could I ask for??

Jaded Hearts captivated me the moment I read the Prologue. By the time I began Chapter One, I knew what I needed to know to start the journey Penelope was about to embark on. 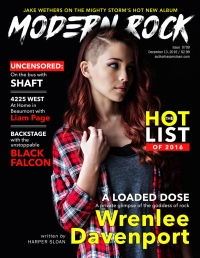 Wrenlee Davenport is the pixie lead singer of Loaded Replay, the band that is filling up stadiums around the world and only growing bigger in popularity with the masses. With her twin brother, Weston, and their two long time friends, Luke and Jamison, she makes music and lives life on the road touring and performing the music they love. But she’s reached a point that no matter how many people she’s surrounded by, she’s still lonely. The allure of he state and audience no longer holds that sparkle and rush she loved so much. But when her very protective and loving brother Wes, brings on extra security, Chance Nash brings about what is missing her life to bring that all back.

Chance was introduced to us in the Home Town series as Cohen’s roommate and best friend. With Jaded Hearts, he gets his chance at love. A former special ops marine, he was hired into Corps Security back in Atlanta. Guilt from failure, in his eyes, he jumps at the chance to take on a job that will take him out of town and away for some change in his life. And the moment he steps into the same room as Wren, that change is evident and strong.

I loved Wren’s feisty boldness. She was so adorably cute and loved by her brother and band mates. She was humble and funny and was exactly what Chance needed to counteract his rough, military edges. There was a definite transformation from his first appearance to the ending but never lost his alpha tendencies and extreme protectiveness. 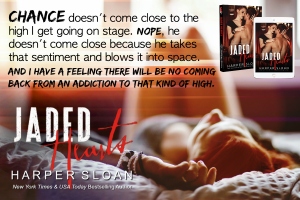 Jaded Hearts was a GREAT start to a new series and Harper Sloan has always been one of my automatic oneclicks. She fails to disappoint in her storytelling abilities and Chance and Wren are just two more characters I have fallen in love with. I can’t wait for the next book in this series.