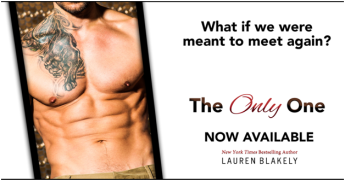 From New York Times Bestselling author Lauren Blakely, comes THE ONLY ONE, a sexy new standalone novella in her One Love Series, brought to you by 1,001 Dark Nights! Be sure you grab your copy today! 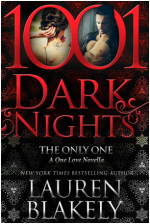 This book was one of the sweetest reads I’ve had the pleasure of reading, this year. The Only One is a story that tells of Gabriel’s second chance. Gabriel was a character I met when I read Lauren Blakely’s last release in her all male POV romantic comedies. His appearance was small but I was intrigued and extremely excited when I found out he was going to get his only little story under the 1001 Dark Nights novella series.

Though he had a small part in The Sexy One, I can confirm that even though I wouldn’t go without reading any of the books in this Lauren Blakely series, it is NOT required in order to enjoy this novella. It was written so well, that I felt like I knew nearly everything about Gabriel and Penny’s history right from the start.

Penny and Gabriel shared several unforgettable days in Barcelona, Spain and had plans to meet up again, in the U.S., soon. Of course, things don’t work out that way, so when they’re face to face ten years later but it did allow for them to get the second chance to get it right on a permanent basis. They’ve grown so much and cemented themselves in their careers, it felt like the time apart worked out for them. It allowed them to use that time to truly establish their identities.

I can’t tell you how many times Gabriel made me swoon. Half Brazilian, half French AND can cook? Yes, please! I want him for my very own. And the smoothness in which he spoke as he declared his passion, attraction and love? That just gave me tingles. The man had a series way with words.

Penny had an extreme love of animals and gave up a career in finance to raise money to help the animals she loves so dearly. Planning the annual charity event is what brings Gabriel back into her orbit and is the spark they need to not only pick up where they left off, but the second chance they were destined for. 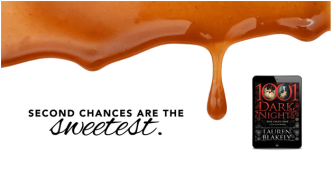 I lean closer to the table, soften my voice. “Forgive me, but you look so familiar…”
Her eyes widen, and something vulnerable seems to flash in them. She brings a hand to her hair. “I do?”
I nod vigorously. “Yes. So much. It’s eerie.”
She swallows. “We all remind each other of others, don’t we?”
“Perhaps we do,” I say. I’m not sure what to make of her answer so I return to the matter at hand, telling her more of what I would make for her charity fundraiser. 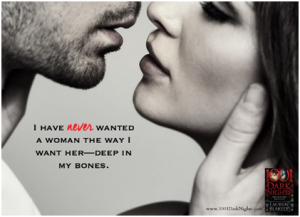 My business manager, Eduardo, alerted me to this opportunity the other day when it landed on his desk. With my new restaurant opening a few months ago, I’ve been looking to make a splash in Manhattan. Reviews have been amazing and business has been robust, but I know that fortunes can turn on a dime. Hell, do I ever f*cking know that. “And I would make the most fantastic desserts for you, too,” I say with a wink, because that reminds me of the afternoon I met the girl in Barcelona—we’d both been eating dessert at a street-side café, where we’d started flirting.
“Desserts are my specialty.”
“What would you make?” she asks, then she murmurs oh God when I tell her what I’d create for the sweetest course. The soft sound she makes stirs something in my chest, then sends a rush of heat below the belt. That sense of déjà vu sharpens, and a reel of images snaps before my eyes, like puzzle pieces fighting to connect.
I scrub a hand over my jaw, arching an eyebrow. It’s driving me crazy. “Are you sure we’ve never met?”

One thought on “📚Review & Excerpt Spotlight: THE ONLY ONE (A One Love Novella) by Lauren Blakely”