Managed in the 2nd book in the VIP series. Though it can be read as a standalone, it’s much more pleasurable to read it after VIP. This way you get to know the other characters and meet/see Scottie how everyone else sees him. This is what made this story that much more enjoyable for me. Because having met him previously and seeing him in is own story is a HUGE contrast and it’s an absolute treat.

I freaking loved Gabriel Scott and Sophie Darling. They were the perfect pair. TOTAL opposites which added to their tension, angst and the whole of this story. Sophie was so carefree, sassy, spunky and sarcastic. She already had me laughing out loud 3 percent into the story. Not knowing anything about Scottie, she gave him a hard time and teased him for his stuffy, snobby persona and it was hilarious. She even caught Scottie off guard. The stuff that comes out of her mouth leaves him speechless on more than one occasion.

And Scottie turned out to be someone so much different than what I expected. Things really ran quite deep with him. Layers and layers that Sophie was able to wiggle her way through without even trying and she did it effortlessly by just being herself. He teasing and wit just broke through and opened him up to let loose. I loved it.

I had never read a Kristen Callahan book before opening VIP and then Managed; and both books have made me a fan. Her writing was amazing and the characters she put on paper had so much personality and life. There wasn’t anything I didn’t like about any of them. They were relateable, likeable and funny. I can’t wait to get my hands on more of this series as it comes. I’m looking forward to seeing the rest of the guys of Kill John have their stories told too. I’m really hoping for a match up between Brenna and Rye. I’ll keep my fingers crossed for that one. 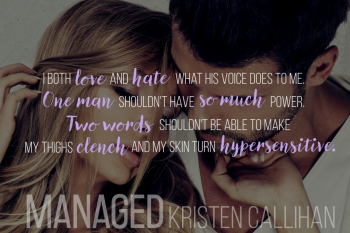 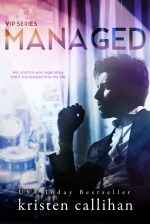 ABOUT THE BOOK
It started off as a battle of wits. Me: the ordinary girl with a big mouth against Him: the sexy bastard with a big…ego.

I thought I’d hit the jackpot when I was upgraded to first class on my flight to London.

That is until HE sat down next to me. Gabriel Scott: handsome as sin, cold as ice. Nothing and no one gets to him. Ever. He’s a legend in his own right, the manager of the biggest rock band in the world, and an arrogant ass who looks down his nose at me.

If I accept his proposal, I leave myself open to falling for the one man I can’t manage. But I’m tempted to say yes. Because the real man beneath those perfect suits and that cool façade just might be the best thing that’s ever happened to me. And I just might be the only one who can melt the ice around his heart. 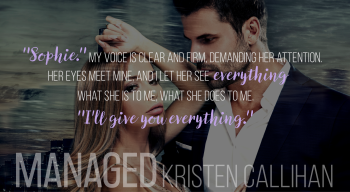