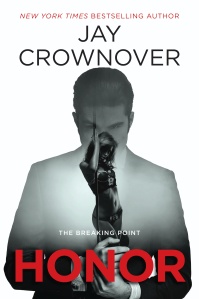 New York Times and USA Today Bestselling Author Jay Crownover returns with her most complicated hero yet, in the first book in the romantic suspense series The Breaking Point.

Don’t make excuses for me.

I am not a good man.

I’ve seen things no one should, done things no one should talk about. Honor and conscience have no place in my life. But I’ve fought and I’ve survived. I’ve had to.
The first time I saw her dancing on that seedy stage in that second rate club, I felt my heart pulse for the first time. Keelyn Foster was too young, too vibrant for this place, and I knew in an instant that I would make her mine. But first I had to climb my way to the top. I had to have something more to offer her.
I’m here now, money is no object and I have no equal. Except for her. She’s disappeared. But don’t worry, I will find her and claim her. She will be mine.
Like I said, don’t be fooled. I am not the devil in disguise… I’m the one standing front and center. 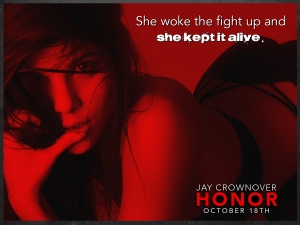 Maybe if I hadn’t spent the last six months slinging pancakes and greasy hash to hungover hipsters and avoiding the too-curious eyes of the cops who like to hit up the diner for early-morning breakfast, I would have noticed the ominous shift in the air.

Before I came to Denver six months ago, my senses had been honed to pick up on the slightest threat. Before, anything that might be dangerous, that might put me in peril, had made my skin tingle, made everything inside of me vibrate with awareness. Now I had settled into a simple, dreary rhythm. Every day was the same as the one before it and there was no outside threat constantly hounding me, hunting me, haunting me. I let my guard down. I had gone soft, and as a result the biggest danger of them all managed to slip into my new normal without giving any kind of hint he was there.

My nonslip shoe—that were probably the ugliest things ever made but absolutely necessary considering the greasy food the tiny kitchen pumped out—squeaked on the laminate floor as I made my way over to the lone patron who had taken the last available seat in my section. The massive plastic menu completely covered his face, but the Rolex on his wrist and the perfect cut of his suit jacket let me know he wasn’t my typical kind of customer. There wasn’t a flannel shirt or police blues in sight, and as I got closer, a whiff of something exotic and familiar engulfed my senses and stopped me in my tracks. Of all the things I had left behind, he was the one I had tried hardest to forget.

The tingling across my skin spread. My tummy tightened. Blood rushed loudly between my ears. My shaking fingers curled around the pen in my hand like a weapon. Before I could pull it together and walk away, the menu lowered and I was pinned to the spot, immobilized by eyes the color of spice rum.

They were wicked eyes. Eyes that saw far too much and gave nothing away. Eyes I daydreamed about. Eyes that caused me to wake up in a cold sweat. Eyes that turned me inside out and shook me up as they made a slow perusal from the top of my head to the tips of my god-awful shoes, returning to my face and staying there as I struggled to keep my shit together.

He slowly put the menu down on the cracked tabletop and leaned back in the booth. He was strikingly out of place here and I absolutely hated how that sexy twist of his mouth, a mouth that I dreamed about almost every night, made my traitorous heart flutter and my pulse kick.

I was also strikingly out of place here, but I’d learned to fake it. He, obviously, never bothered to fake anything. He wasn’t a man with virtuous intentions and he never pretended to be.

Gone were the mile-high stilettos that I always wore. In their place I now donned work shoes that prevented me from falling on my ass as I ran food and dirty dishes to and from the kitchen. I was hiding in plain sight, knowing that the last place on earth anyone who might come looking for me would check out would be this greasy spoon. This was the opposite of me and the life I had always lived, so even though I could afford better, craved more, this was where I needed to be…until he showed up.

About Jay Crownover:
Jay Crownover is the New York Times and USA Today bestselling author of the Marked Men, The Point, and the Saints of Denver series. Like her characters, she is a big fan of tattoos. She loves music and wishes she could be a rock star, but since she has no aptitude for singing or instrument playing, she’ll settle for writing stories with interesting characters that make the reader feel something. She lives in Colorado with her three dogs.  Website | Facebook | Twitter | Goodreads | Amazon