*A modern love story inspired by Romeo and Juliet* 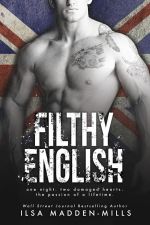 ABOUT THE BOOK
Two weeks before her wedding, Remi Montague’s fiancé drops her faster than a drunken sorority girl in stilettos. Armed with her best friend and a bottle of tequila, she hops a plane to London to drown her sorrows before fall semester begins at Whitman University.

She didn’t plan on attending a masquerade party.

She sure didn’t plan on waking up next to the British bad boy who broke her heart three years ago—the devastatingly handsome and naked Dax Blay. Furthermore, she has no clue how they acquired matching tattoos.

Once back at Whitman together, they endeavor to pretend they never had their night of unbridled passion in London.

One night. Two damaged hearts. The passion of a lifetime.

Declan and Dax may be twins… but my love for them is NOT equal. I have to say, Dax is my favorite and I’m super jealous of Remi right now.

Who doesn’t love the epic story of Romeo and Juliet? It has always been a fave of mine and Ilsa Madden-Mills delivers a totally new and completely fresh take on such a historic romance. I’ve read my fair share of modern fairty tales and this one is up there in my favorites list.

When I met Dax in Dirty English, I saw him like everyone else did. The player that made his rounds the campus and enjoyed the advantages his sex appeal provided. Girls can’t resist a sexy guy with a British accent. I know I can’t. But while reading his story in Filthy English, I saw so much more to Dax Blay and I fell so much deeper in love with him than I did with badass, sexy MMA fighter, Declan. There was so much depth to his emotional cavern that I felt my heart hurt when his hurt. He had so many feelings buried so deep within and keeping his distance from real emotional connection was his only way to deal.

Remi had a similar coping mechanism for dealing with her past loss and together they were quite a mess. But they were such a BEAUTIFUL mess; which made Filthy English practically poetic.

Funny and emotional, this book had everything I could have wanted in a great read.