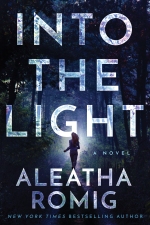 Coming October 18th
Away from the Dark (Pre-order Available)

ABOUT THE BOOK
An investigator’s search for a friend draws her into a world darker than she could have imagined.

Sara Adams awakes blind, unable to remember the most basic details of her life, but her darkness seems a blessing when she discovers the terrors of The Light.

Stella Montgomery investigates the news on the mean streets of Detroit, where she’s noticed a disturbing trend: young women are vanishing. When her best friend disappears, Stella investigates—despite warnings from her police detective boyfriend—following a twisted trail that leads her through the city’s most dangerous and forsaken precincts. There she uncovers something more sinister than she could have imagined: a shadowy organization known as The Light, led by the enigmatic Father Gabriel.

As Sara struggles to understand her place in the strange world she’s awakened to—an oppressive cult demanding unquestioning obedience—and her feelings for Jacob, the husband she can’t recall and whose harsh and tender attentions confuse and beguile her, Stella risks all to discover the truth. But enlightenment always comes with a price… 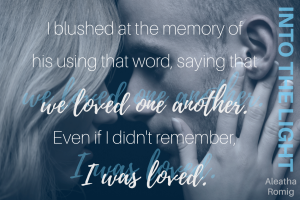 Sara
Mute as I was, with my eyes covered and my hand encased in Jacob’s, no one but my husband noticed my lack of participation. I remained still as he continued to relay my nonexistent responses, leaving me a bystander to my own story and unable to affect its outcome.
Maybe this wasn’t real, maybe it was a bad dream and the scene would soon fade. My stomach twisted as their exchange continued and they discussed my insubordination and correction. Each time Brother Timothy condemned, Jacob reminded him that my transgressions were alleged, not proven. It was as if suddenly I were on trial in my hospital room instead of in a court of law.
It wasn’t until I heard the word banishment that their conversation again registered. Whatever had been said had apparently been the parting word. Murmurs floated above the sound of various sets of feet exiting, then finally there was silence. When the door clicked closed I released my breath.
Turning toward my husband, I waited for an explanation. Nothing. I was about to pull my hand away when I felt a tug on my right arm and a woman spoke. 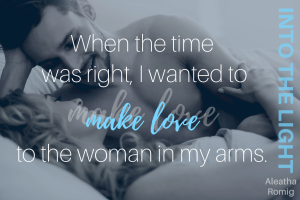 “Brother Jacob, Dr. Newton would like to examine Sister Sara now.”
So many brothers and sisters. So unfamiliar.
“Are you giving her more medicine?” Jacob asked.
“After the doctor comes. He’d like her to be awake.”
“Tell him he’ll need to wait until morning. She’s had enough commotion for her first day.
Bring her medicine, something to drink, and let her sleep.”
I pressed my lips together in protest. Not that anyone noticed. They were doing it again. Discussing me while I was right there. Why does no one else find this wrong?
“I’m sorry,” the woman, who I assumed was a nurse, said. “The Commission hasn’t approved her intake of fluids. Refusal of nutrients is an approved decree.”
Jacob’s grip tensed. “I’m quite aware of the Commission’s approved decrees.”
“I’m sorry, Brother. I didn’t mean to . . .”

“It’s been over a week. She needs more than what she’s getting from that needle.”
“I believe they’ll discuss it in the morning since Brother Timothy was able to see and talk to her. They should have a revised decision by tomorrow. I can’t go against . . .”
Jacob sighed and his grip remained tight. “I understand,” he conceded. “Then bring me ice chips. If we hurry before they melt, they’ll be solids and not liquids. That won’t violate the Commission’s authority.”
“Brother?”
“Bring me ice.”

I must say, Aleatha Romig sure knows how to keep a reader on the edge of their seat!! I didn’t even know how I was going to put a review together without giving anything away.

In Into the Light I was gifted with a thrilling ride filled with so much suspense and intrigue. I was instantly hooked by the prologue and from chapter to chapter I tried my hardest to solve the puzzle of what was happening, but by the end I was wrong and oh so surprised!! Stella, Sara and Jacob each give their point of view of what’s going on and it’s fan-fricking-tactic.

Sara awakened with no memory surrounded by people and a culture she’s not aware of. Leary of who they are and their intent, she finds some solace in Jared, her husband. Though there are moments of doubt, she finds that she trusts him and looks to him for safety and protection.

Stella is a reputable investigative journalist searching for any clue she can to find her missing friend and stumbles on to a story much bigger than she anticipated.

Jared is a respected member in his community, rising quickly in their ranks and doing all he can to care for and protect his wife from those that want to see him fail.

Together you get an ingenious story that will have you on your toes and holding your breath. Into the Light is the first book of Aleatha’s that I’ve read since falling in love with her Consequences series and I can already tell you that I’m going to love The Light Series just as much, maybe more.