ABOUT THE BOOK
A blueprint for desire …

With a shared passion for breathing life into an unconventional dream home, the attraction between a struggling new grad of interior design and an award-winning architect with eclectic sexual tastes is irresistible. But with a cloud of lies and loss hanging over him, the only arrangement Logan wants is one of indulgence and pleasure. However, fate seems to have another design plan in mind for them—a plan that ultimately leads them down a path of desire and discovery.

When the man obsessed with creating his unusual home sets his sights on the woman who keeps unknowingly navigating her way back to him, lust clouds his judgment and he makes an inappropriate proposition. After nearly blowing his chances with the talented and alluring beauty, he readjusts his plans, because it just so happens that his sexy ulterior motives go hand-in-hand with her expertise in interior design.

Though Chloe may be young and naïve in Logan’s eyes, she sees him for who and what he is: a man with severe commitment issues. But she’s optimistic—maybe too optimistic. And she isn’t easily deterred or scared away either, not even by the unusual nature of his design plans or his eclectic sexual tastes. In fact, she’s intrigued by them. Faced with a man who can give her not only the experience she needs to propel her career, but everything she’s ever fantasized about, she hopes that their physical and intellectual compatibility can prevail over his fears. And more importantly, that they can move forward to become not only design collaborators, but partners on a deeper level.

The look on Logan’s face was new, different, and the urgency in his voice more demanding. The three words Logan had spoken with casual ease sent a shock wave of embarrassment and riot of emotions through her. Sitting idly and uneasily with her knees pulled up and her hands resting on her stomach, blood rushed to her cheeks.

She had never done that in front of anyone. Not to completion, anyway. She recalled a few years earlier overhearing a classmate tell about how she and her boyfriend had played with themselves in front of each other. The mortification it had elicited within her was something she remembered well, and a self-conscious giggle floated up from her throat at the thought of someone watching her, most especially the man whose opinion meant everything to her.

Chloe hesitated for only a moment when Logan stood upright and glared down at her.

A gust of wind whipped against the window and momentarily drowned out the man’s voice singing about Control. She opened her mouth and when the words I can’t slipped past them, Logan pushed her knees apart and kneeled between them to silence her with a finger pressed to her lips.

“She can’t,” he whispered with a light shake of his head. His tone was nondescript, and there wasn’t a hint of contemptuousness or sarcasm in his next statement. “Haven’t you figured out yet what makes this thing between us work? What will continue to make it work? Or, should I draw you a schematic or sketch you a diagram?”

Bewildered and taken aback by Logan’s questions and the intensity of his gaze, she awkwardly stretched out on the chair without saying anything. When he stood, gripped his shaft and commented offhandedly in a tone as if he was speaking to a child—see, this is how you do it—while slowly stroking himself into a full-blown erection, her face heated with humiliation again. 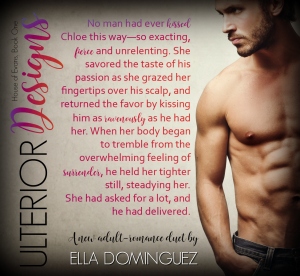 A moment later, he spoke more purposefully. “I enjoy being with you, but my demands aren’t up for negotiation, so I need you to listen carefully.” Stroke. “When we’re together …” stroke, “… you do as you’re told.” Stroke. “As. You’re. Told,” he repeated with calm tenacity.

Doing as she was told was a nice idea in theory, but Chloe had serious doubts as to its practical application. During sex, sure—no problem. She liked Logan being in control of her pleasure. But in real life? She wasn’t the kind of woman to lie down, so to speak, for any one. Logan was pushing her too hard and too fast in his attempt to try and prove something, but what he was trying to prove was beyond her comprehension. At any rate, her mind was too clouded with excitement to attempt to figure it out.

As she lay tensely waiting for his next move, she made the mistake of meeting his eyes. The burn of heat in their shadowed depths urged her forward and it was as if she was watching herself from above when her hand slid down her belly and between her legs. Fingers glided over her labia and a digit swirled around her clit before dipping inside, she watched as one side of Logan’s mouth tipped into a sated grin.