Everything is sexy at Knight Fashion Magazine.
Nathan and Olivia’s story is NOW LIVE!

Read an excerpt HERE
My Review

ABOUT THE BOOK
Nathan Cross is living his dream. Not only is he modeling for Knight Fashion Magazine, recently voted “sexiest man alive,” but he is dating a beautiful photographer who could be his new future. When he unexpectedly reunites with his past love, his world crashes around him. Two loves. The past or the future: which one will he choose?

Olivia’s past choices come back to haunt her and could ruin everything she has worked so hard to build. Troy has the power to destroy any hope of happiness. She will do everything to keep that from happening, even if it means giving up her second chance with Nathan. Lies. Revenge. Scandal. Olivia could lose it all.

Ten submissive women. One billionaire dominant.
Three months competing for his “affections.”
One winner takes all. 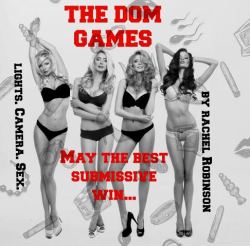 99c FOR A LIMITED TIME

Dominic Reed, heir to an oil fortune, has spent his entire adult life perfecting his dark hobby. With little control in every other area of his manicured life, he finds his release as a dominant. With more money than he knows what to do with, he creates a TV show: The Dom Games.
This year is different than the past seasons, this year Dominic will be the star. He wants a forever submissive.
Before last month Kayla Parchet thought the word submissive only referred to dogs. Fresh out of college with a business degree that is scrap paper, she needs to get an Ivy League masters degree to pursue her dreams. When Kayla is accepted to be one of the ten, her world takes a dark turn as she competes against women who live the submissive lifestyle for enjoyment. Can she hold on to her dreams long enough to win the competition and ten million dollars? Or will she get sucked into Dominic’s twisted world?
Only a few whips and canes stand between Kayla and the future she’s always desired.
Lights, camera, sex…

This was my first read from this author an I am now a fan. The premise of the story intrigued me. It’s a combination of The Bachelor and Fifty Shades…except our heroine in this story is no meek mouse. And I loved her!

Kayla Parchet is in need of funding to obtain her Masters so the easiest way to get her hands on that kind of money is to hope she’s picked for The Doms Games. A hit reality show where a Dom tries out several women to find his perfect submissive. The problem is, Kayla is NOT submissive. She outspoken, brash, spunky and stubborn. She’s PERFECT for reality TV.

Dominic Reed is a powerful man and his sexual preferences are highly publicized, but he’s reached the point he want to find his “forever” sub. Being the Dom on the upcoming season of the show is his way of, hopefully, finding what he’s looking for. He’s intrigued by Kayla and her behavior. He sees her lack of tendency to be/act submissive and makes it his mission to “break” her. And that’s where the entertainment comes in.

Both of these characters clash yet feel pulled to each other and they’re both so strong willed. I loved seeing them together. Kayla’s sassiness and sarcasm was awesome! Her quick whit kept Dominc and her competition on their toes. She truly was the star of the show.

This isn’t a love story, but it is a story of love.

Then there’s Yanelys Sanchez—the one who made the journey worthwhile. She was the one who picked up my broken pieces, smoothed out the rough edges, and made me whole.

At least as much as I can be.

I’m still failing, still recovering, still trying. I’m only human—drunk on the idea that she, and only she, can save me. 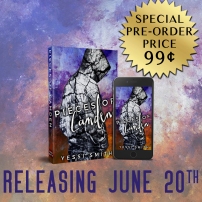