They call me a slut. Maybe I am.
Sometimes I do things I despise.
Sometimes men take without asking.

But I have a musical gift, only a year left of high school, and a plan.
With one obstacle.

Emeric Marceaux doesn’t just take.
He seizes my willpower and bangs it like a dark note.
When he commands me to play, I want to give him everything.
I kneel for his punishments, tremble for his touch, and risk it all for our stolen moments.

He’s my obsession, my master, my music.
And my teacher.

But the truth is that you do know me.

With Devi, my entire universe shifts, and the more time I spend with her, the more I realize that Logan O’Toole isn’t the guy I thought he was.

So maybe I’m not the guy you thought I was either. 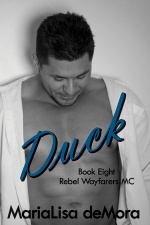 Reuben Nelms has worked hard all his life. First to escape the West Texas town where he grew up, then to negate the legacy of his family. One of his worst regrets was failing to protect a young woman from evil dealt by his blood brother. For years afterwards, he watched and protected her from the shadows, most comfortable in that faceless role.

Now known by his road name, Duck feels he’s finally found redemption in watching that woman blossom and grow, sheltered by her association with his brothers by choice, the Rebel Wayfarers motorcycle club. Things were settled, predictable, until a desperate call from home sets him scrambling and he is back front and center, home again in West Texas, finding himself confronted daily with reminders of his horrific family heritage.

Treading alongside the remembered fear and regret surrounding him walks a temptation, Brenda Calloway, the hometown woman he left behind. The efficient business manager of the cattle company he inherited from his father, his childhood friend is now a widow. More beautiful than ever, she’s a single parent with a secret, unaware of the power she still wields over Reuben’s heart.

Will their second chance love be able to take root and grow in the dry deserts of West Texas? Can Duck put aside the man he’s become, sloughing off the brotherhood and leaving that behind to become Reuben again, or will he be able to pick up the pieces of his teenage love and still continue his life in Chicago as a member of the Rebel Wayfarers MC? Add to Goodreads

“Everyone has three lives: a public life, a private life, and a secret life.”
– Gabriel Garcia Marquez

From Chapter 18: Three hours
Reaching in for the tiny spade, he heard a crinkle and stretched the opening of the bag wider, looking inside again. A piece of paper. He was unfolding it when his phone rang, the sound inside his head startling because he had forgotten about the earpiece. Reaching up to tap the button, he straightened the last fold to read the words just as he heard Myron’s voice say, “Pinto’s got squat. You find anything, Duck?”
Eyes fixed on the paper in his hand, he didn’t answer for a moment, pulse jolting erratically, his breathing coming faster the longer he knelt there, reading and rereading the oh-so-brief message written in bold stripes of black ink. Absence scrawled in loops and swirls; lack as promise. He could feel the words’ weight through the paper, the pen having impressed deeply on the material, nearly punching through in some places. Unreadable Braille. Handwriting, small and cramped, even and unhurried. The author took their time with no fear of discovery, no need to rush. One more piece of the riddle to toss down, clues gobbled up by Duck’s brain like bread on the shore of a pond.
As if from far away, he heard Myron’s voice barking a question, “Duck, you there, brother?” Duck sucked in a harsh breath, then another, Myron evidently hearing that because he shouted, “Brother, talk to me. Tell me. What the fuck’s going on?”
“I got her.” There was a sudden increase of noise on the phone but he couldn’t focus on that. It didn’t come close to hitting the scale for attention. “I got her.” He sucked in a breath. “Jesus.” Another breath, urgency pounding through his veins. “I don’t got her, but I got her. I gotta go. I gotta get her, brother. Get someone here, Myron. Fuck, get them here. I gotta get to work. She ain’t gonna die, man. Not like that. Not alone, not like this.” He didn’t wait for Myron’s response, disconnecting the call. He knew the man could track the device within a three-foot radius, and also knew his brother would spin up help just as fast as he could fucking dial it in.
Looking down at the joke of a spade in his hand, he stared at it for a moment as panic and adrenaline fought for dominance within his chest, and then he worked hard to stifle it. Successfully forced it all down, shoving it deep as he shifted his gaze back to the paper.
You coming in shut down her air. She’s got three hours.

Angelica Rose’s mom always told her that desperate times called for desperate measures. Walking into a strip club and asking for an audition certainly qualifies as desperate, but when her mom’s battle with cancer ends months before Angelica is due to start college, she doesn’t feel like she has much choice.

The moment Morgan Cadwell sees her on his stage, he knows she’s the one woman who could make him break all the rules. There’s no way he’s going to let Angelica dance for other men, so he hires her as his live-in personal assistant instead.

Morgan’s offer lets Angelica keep her clothes on…but little does she know that, in the end, he’ll make her bare her soul instead.

Warning: This book is about an alpha caveman and a sweet but fierce virgin heroine who fall ridiculously fast in insta-love. If you’re okay with that, then enjoy!

“Hey, I thought there was no touching in lap dances?” I tried to protest.
“There will always be touching between you and me,” he answered.
I knew it shouldn’t get to me. I didn’t know this guy and I was acting a part to try to get a job. But holy hell his words and his touch were turning me on and confusing me. If I was honest with myself, I’d admit that there was crazy chemistry between us and maybe—just maybe—I was using this situation to my advantage to see what happened.
“There is no you and me,” I retorted as I tilted my body away from him.
“There will be,” he insisted.
Some of my uncertainty must have shown on my face because his hands gentled and he ran them from my hips to my back and stroked softly. He lightly tugged on the material but it didn’t fall any further. “Show me more.”
I could feel his cock hard underneath me, my pussy resting over it and driving me more than a little wild. I’d never been in a situation like this before. His dark eyes burned into mine and I threw all caution to the wind as I undid the rest of the buttons on my dress. It fell, the material gathering around my waist. Morgan held my eyes as his hands moved away from me to grasp my dress and toss it to the ground.
He practically growled as his gaze roamed over my body. I’d chosen my lingerie carefully this morning, choosing the nicest set I owned. It was white lace, so I was worried it made me look too innocent when I’d picked it out, but I didn’t have a lot of choices. Now I was thrilled with my selection because it fit the role I was playing to perfection.
“Maybe if you’re very good for me I’ll forgive you for being naughty,” he said as he trailed a finger down my chest and snapped the front clasp of my bra open.
His action surprised me, and I moved my hands to cover my chest without realizing what I’d done. He quirked an eyebrow at me in a subtle challenge, like he’d known all along that I wouldn’t be able to stay in character. Taking a deep breath, I remembered the role I needed to play if I wanted this job and forced my arms back down.
“What if I want to be bad for once?” I asked as he slid my bra straps down my arms.
It was like he’d woven a seductive spell around me, making me forget why I was here and all of my troubles. I’d never felt anything like this before. My skin was on fire, goosebumps running along my flesh. My panties were damp and I couldn’t stop myself from rubbing lightly over his length. My body was tightening in anticipation of what would come next.
“As long as you’re with me, you can be as bad as you want to be, Angel,” he whispered before closing his mouth over one of my nipples. Each hand held one of my breasts, squeezing lightly. He plucked at the other one with his finger and thumb, making it pucker with need.
“Ohmigod,” I gasped at the sensation, closing my eyes so I could pretend this wasn’t actually happening.
“Look at me,” he ordered, and my eyes popped back open to find him staring up at me. “You keep your eyes on me, Angel. I want to see every single thought that runs through your head. No hiding.”