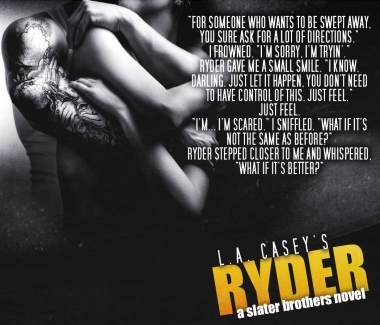 My eyes locked on the corner booth, or rather on the man in the booth.

“Branna?” Aideen laughed. “Will you blink?”

I knew I was staring, and for the life of me I couldn’t make myself stop or at the very least look away. My libido sprung to life and had taken over full control of my body.

“Who is that?” I asked Aideen without taking my eyes away from the Greek God that was sat in the corner booth gulping down Budweiser like it was water.

“That,” Aideen wickedly grinned as she nudged me to the edge of the dance floor, “is Ryder Slater. Skull says he is from New York and that he just moved here with his younger brothers, one of his brothers – who is an identical twin by the way – is a fighter. He has fought here almost every weekend for the past few weeks, he is lethal and is only Bronagh’s age.”

I heard everything Aideen said, but my mind, and vagina, only focused on one crucial detail of her intel: Ryder Slater.

“He is gorgeous,” I gushed, unable to look away from him.

Aideen whooped over the music. “Go get him, mama.”

I felt molten heat creep up my neck. “I can’t.”

I looked at my friend and frowned. “How does a woman like me talk to someone who looks like him? Because I honestly have no idea. I’ll make a tit out of meself.”

Aideen rolled her eyes and over the music she said, “Branna, will you listen to yourself? You sound like you’ve already been rejected by him, but you haven’t and you won’t, if you just be yourself. You’re stunnin’, babe, and you’re a hell of a girl, too. Lads dig that.”

I hated that my eyes welled up. “You’re so sweet to me,” I said and quickly dabbed under my eyes, careful not to ruin my eye make-up.

“We have got to get you laid,” Aideen grumbled. “And Ryder Slater will be the one to work out all of your kinks. Come with me.”

Everything happened rapidly fast then. Aideen grabbed hold of my hand and quite literally tugged me along behind her as she briskly walked off the dance floor, not caring that body after drunken body was in our way. I shouted for her to slow down, but either she couldn’t hear me over the music, or she flat out ignored me. I only shouted once because I became very self-aware that I was shite at walking in heels, and brisk walking in them could very well cause my immediate death.

When we made it through the crowd and across the dance floor I silently thanked God that I survived, but then quickly asked him to take my life when I realised where Aideen brought us to a stop. We were no more than a metre away from the very booth that the stunning Ryder Slater was sat at. He was looking down at his phone, but when he noticed we were standing next to his table staring at him, he pocketed his phone and gave us his full attention.

I stepped behind Aideen out of sheer mortification.

“Hiya,” she shouted over the music. “I’m Aideen, and this is Branna, we thought you might like some company. You look a little lost sittin’ over here on your own.”

How can she speak to him, or any man, with such confidence? I wondered. I would never be able to do that, not without looking like an utter fool in process.

I was jolted from my thoughts when Aideen turned to me, and roughly pulled me out from my hiding spot behind her. I stumbled to her side and knocked my knee against hers causing me to hiss. I resisted the urge to rub the sting away, because my attention was now on the grey eyes that were trained on me.

“Hello,” Ryder said at the exact same time the song playing changed. It allowed me to hear how deep his voice was, and how wicked his accent sounded.

His lip twitched and I wondered if he already thought I wasn’t worth the trouble of talking to.

“Would you like to join me?” he asked, raising his voice to be heard over the now thumping sound that filled the club.

I swallowed, and stared at him with shock.

Aideen jabbed her elbow in my side and answered for me. “She’d love to,” she gushed.

She put her small hand on the base of my spine and pushed me to the side of the booth Ryder was sitting on, and I didn’t know why, but I resisted. I suddenly felt like I was being fed to the sharks. I brought my face to Aideen’s and said, “I can’t do this, I’ll feel too idiotic to sit next to him. I don’t trust meself not to say somethin’ stupid.”

Aideen completely ignored me and turned me around to face Ryder – who hadn’t moved an inch since we arrived at the table – and nudged me forward with both of her hands. To avoid falling on top of Ryder, I had to turn on my side and drop into a sitting position next to him. I didn’t look at him out of fear I’d see amusement on his face, so instead I looked to my friend – I use that term very loosely – and tapped the empty spot next to me, but she shook her head, grinning.

I widened my eyes, and pleaded with Aideen not to leave me through my skull drilling stare.

I gasped when she turned and almost instantly got lost in the crowd. I sat up straight and searched the crowd with my eyes in hopes I would see her, but I only saw strangers’ move their bodies to the playing music. 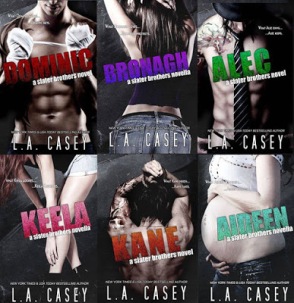