One bad biker. One gorgeous sheriff.

“You know what I think it is?”
“I don’t really care,” I state, but I am curious.
“You want me.” He says it so softly I barely hear him. Glancing in my mirror, he’s looking down, his face unreadable, his tone serious.
“Don’t flatter yourself,” I respond curtly, trying to stay resilient. I’ve seen the girls who are associated with his club; he’s a player and is telling me what I want to hear.
He grunts, a smile breaking across his face. “You’re telling me you didn’t like me kissing you the other night? That my hand up your shirt didn’t light a fire in those little panties of yours?” His tone is arrogant. My body responds, my nipples hardening, craving to have his rough touch one more time. Goddamn him, why can’t he shut up?
“I was drunk,” I defend, looking out the windshield.
The car goes quiet, and I’m thankful; his confrontation made me uncomfortable.
“Hey, Rookie?”
“Hmm?” I look in the rearview mirror to see his face. His mouth is parted, the corner of one lip curved slightly as he looks downward.
“How sore do you think you’ll be after I’m done fucking you?”

As the president of the Sin City Outlaw Motorcycle Club, l fuck as hard as I ride and rarely go to bed alone.

The women are fast and the violence is intense.

I excel in both.

People either respect me or fear me. I’m not arrogant. It’s just the truth.

I was a king, reigning over Vegas without complication, until one gorgeous sheriff made everything fall apart.

When I saw her, I became a Neanderthal, wanting nothing more than to be between those legs.

I guess that’s where I went wrong, because my reality was shot to hell real fucking fast.

One kiss caused her to step over that blue line.

One night in her bed made me a traitor.

And now… we’re both screwed. 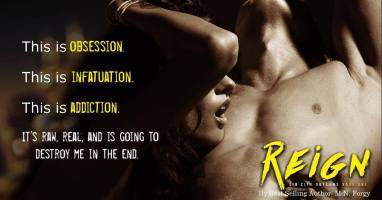 M.N. Forgy was raised in Missouri where she still lives with her family. She’s a soccer mom by day and a saucy writer by night. M.N. Forgy started writing at a young age but never took it seriously until years later, as a stay-at-home mom, she opened her laptop and started writing again. As a role model for her children, she felt she couldn’t live with the “what if” anymore and finally took a chance on her character’s story. So, with her glass of wine in hand and a stray Barbie sharing her seat, she continues to create and please her fans.  Website | Facebook | Twitter | Goodreads | Amazon