Warning: This is a dark romance novel not intended for readers under the age of 18 due to graphic violence and situations.

The past and present collide in the final book of the Darkness Series. Old enemies return and unlikely allies are formed when a serial arsonist targets the small town of Stockton Crossing, Louisiana. Working together with the surrounding towns of Durham Heights and Norton Springs, firefighter Lieutenant Weston Hunt is forced out of his reclusive tendencies to help apprehend the madman.

When Aubrey Sinclair, the sexy librarian he’s always had a thing for becomes the next target, they are thrown together in more ways than one. She needs his protection and he’s powerless to deny her. With the chaos closing in around them, will they solve the puzzle before it’s too late? Or is their destiny to go down in a fiery blaze?

All bets are off and the body count is higher than ever in this explosive, maddening conclusion to the Darkness Series. The final act is upon us—do you dare enter the darkness one last time? 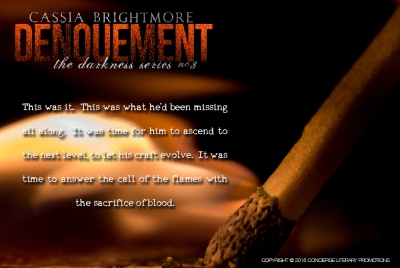 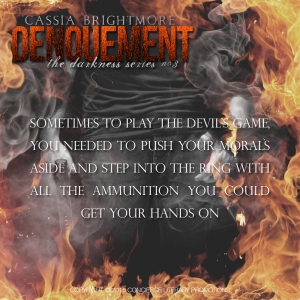 Cassia Brightmore is a Dark Romance Author. Her debut series, The Darkness Series is a trilogy of books that can be read as standalones. Malevolent and Evanesce are available now, with Denouement, the final book in the series set to release in November, 2015.

Up next for her will be Lincoln Hospital, the first book in a dark medical series. The Trauma Series is expected to release in March 2016.

Writing has always been a passion of hers and publishing her first novel is truly a dream come true. She enjoys writing dark stories and characters that she hopes will thrill the reader.

Cassia lives in Grimsby, Canada with her two furbabies, Harley and Molly.