Tall, dark, and dangerously handsome, Zane “Tracker” Colter is the strong, silent type of tattooed muscle biker who drives women wild. But as a master of strategy for the outlaw MC club, Sinner’s Tribe, he doesn’t have time to play around with groupies and biker chicks-especially when he can’t stop thinking about Evie, the girl who got away…

Evie’s been in love with Zane ever since they were children-until he broke her heart and disappeared. Now he’s back in her life, bigger and badder than ever. Zane is stunned by how beautiful and confident Evie’s become, using her artistic talent to customize motorcycles. He wants her so bad, he’d ride through fire to win her back. There’s one problem: Evie is dating his deadliest rival-the leader of the Black Jacks-and if Evie and Zane hook up, there’ll be hell to pay…

Sparky’s shop shook with the hard beat of metal music, the thud of the bass carrying up the stairs where Evie had just put Ty to bed before changing for the party. She had only one fancy outfit in her suitcase, a Scandinavian-style black dress in a crepe fabric with unique cut-outs on the sides and front, and a wide bandeau strip across her breasts. Not really her style, but Connie had convinced her to buy it one Saturday afternoon by feigning a collapse in the store dressing room when she tried it on.

Zane met her in the hallway at the foot of the stairs. He’d been out all day at the clubhouse dealing with the situation with T-Rex, and her gaze skittered from the tips of his heavy dust-covered biker boots, to his low riding jeans, snug in all the right places, and then over his muscle-hugging T-shirt to his tanned, frowning face. Memories of what they’d done last night sent a wave of heat through her body and her cheeks flushed.

“You’re showing a lot of skin.” His frown became a scowl as his gaze swept over her body. “Do you know what it does to a man when he gets a glimpse of something he’s not supposed to see?”

Zane splayed his hand under the back panel of the dress, his fingers skimming the edge of her panties as he pulled her against him. “It means I only got two hands, and there’s a lot of brothers who won’t be able to take their eyes off you since you’re showing more skin than dress.” He pulled his hand from beneath her dress, and slapped her ass. “Go change.”

Evie cried out in surprise. The slap was more of a sting than true pain, but the responding throb in her sex shocked her, made her wonder what would happen if he slapped her again. But the sudden thrill quickly turned to indignation.

“Seriously?” Evie glared at him, her mouth agape. “You’re ordering me to go and change my clothes? I’ve seen some of the clothes the old ladies are wearing. I look like a nun compared to them.”

“You got a habit upstairs, I’ll be a happy man.”

“I’m not changing, Zane.” She leaned against the wall, folded her arms over her chest. “Even if we were together, which we’re not, I wouldn’t let you tell me what to wear. I went through that with Mark. He was insecure right from the start because he never felt he could measure up to you and Jagger. When he lost his job, he started drinking again and that just made it worse. And when we had to rely on my income, he couldn’t deal with it. He started following me around, trying to cut me off from my friends, checking my phone, showing up at work. He threw out some of my clothes, called me a slut . . .”

“Jesus Christ. Once we get T-Rex, I’m fucking going after him.” He leaned one elbow beside her and traced the cut out on the left side of her dress with his free hand, his finger warm against her skin. “What if I ask real nice?”

Evie bit back a smile at his sudden change in demeanor. “Jagger saw my dress. He didn’t have a problem.” 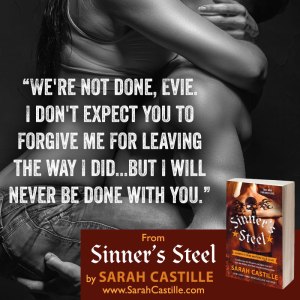 Flustered by his possessiveness given that she’d pretty much booted him out of her room last night, she had no idea what to say. And when he pulled her in close and lowered his face until their noses were almost touching, she wanted nothing more than to run her tongue over his lips and forget about speech all together.

“You showing something that belongs to me, makes it my problem,” he murmured.

“Last night.” He feathered kisses along her throat, following her jugular to the hollow at the base of her throat. “Says you do.” His hands slid down to her ass and his fingers dug into her cheeks. “Way I feel now, thinking of the brothers lookin’ at you, touching you, and you showing off what you shared with me last night, says you do.”

Desire pulsed through her, a deep throb that intensified with every second. “It was just sex.”

See where it all began with book 1 of the Sinner’s Tribe series, Rough Justice.

Beyond the Cut also available at these retailers:
Barnes & Noble | Kobo | iTunes