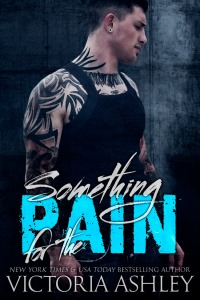 Tempting, inked and highly addictive. Alex is all that and more…

I’ve made a lot of mistakes – ones I’m not proud of, and definitely ones that have left their marks both mentally and physically.

Things got lonely; I got lost in my own fucked up mind and in the end it left me fucked out of my mind and unable to fight – or at least win. That life’s over for me and I’ve moved on.

Six months into tattooing at Blue’s and already I’m the most wanted and sought out tattooist. My biggest clientele consists of women.

They come into the shop, end up in my bed and we both come out happy. It’s been my release since I’ve stopped fighting. It’s become part of the “new” me.

But when Tripp reappears in my life, I can’t deny the fact that I would do anything for that girl.

So when she asks me to move in with her and her ‘boyfriend’ – our other childhood friend – I never expected for things to get so fucked up and twisted that I would find myself only more attracted to her by each passing second or wanting to protect her from everything that isn’t me.

I have worked so hard over the years to suppress my feelings for her but when I find out that her and Lucas have been having an open relationship, I have the strong urge to rip his heart straight from his chest – to destroy the very thing that keeps him breathing.

What I didn’t expect was for Lucas to ask what he did. For him to ask me to do the one thing I have secretly longed for since I was old enough to know what the need was. The second thing I never expected was the look of need that I saw in Tripp’s eyes when he asked.

One night of free passion could change our lives forever.

I never said that was a good thing either…

I hear my door push open, but I’m too tired to acknowledge it. It can’t be any later than seven thirty in the morning, so I just stay lying on my stomach.

I hear something get set down on my computer desk before I feel the bed dip down next to me. It must be Lucas saying goodbye before he has to get ready for work.

Groaning, I reach out and grip his upper thigh, surprised at how hard and thick it feels in my hand. I guess I never really paid his legs much attention before. “Ughhhh… my head. Why did you give me all those shots last night? I feel like hell.” I run my hand up higher, stopping just below his package. Why does he feel so good right now?

Shocked, I let go of his thigh and grip onto the sheet to cover my bare breasts, while maneuvering my way to my knees. I almost forgot that Alex finally moved his stuff in last night. Man, I really must’ve had a few too many shots.

“Crap, Alex. I thought you were Lucas.” I reach up with one hand to cover my face as my head starts pounding. “I guess I drank a little too much last night.” I pull my hand away and squint from the light shining in my room. “I almost grabbed your dick, Alex. You weren’t even going to say anything?”

Grinning, Alex stands up, and I can’t help but to notice how sexy he looks, wearing only a tight pair of boxer briefs. Not only do I get him as a roommate, but now I’ll also have to see him running around in his underwear. Talk about a distraction.

“Just a few too many.” He runs his hand through his wet hair. “And I’m not going to stop something that feels good. I’m sure your hand was enjoying it too much. Now sit up straight.”

I watch as Alex walks over to my desk and grabs a plate and a glass of something. My head hurts too much to even pay attention to his words. “What’s this?” I ask as he sets the plate on my lap. “You made me breakfast?”

He sets the glass down on the nightstand beside me and I peek over to see that it’s orange juice. “Yeah.” Without another word, he walks into the bathroom. I almost think he’s going back to his room, until he emerges a few seconds later, holding something in his hand. He places two pills into my hand and crosses his arms over his chest. “Ibuprofen. Take those and eat your food.”

Not questioning him, I do as told. The first bite of food causes me to smile at its deliciousness. “Oh my goodness, Alex.” I point down at the toast before taking another bite and quickly chewing it. “This is absolutely delicious. Wow.”

He smiles. “Tell me something I don’t know.”

I toss a piece of egg at his head. “Cocky much?” I laugh as he grabs my hand and takes a bite of the eggs that I was just about to eat. “Very much so.” He chews the eggs and rubs a hand over his stiff abs. “What you doing before work?”

“I was going to stop by and visit Tara. You want to come with?”

He nods his head and starts backing away to the bathroom. “Yeah. I’m sure she misses the shit out of me.”

I laugh, accidently spitting the mouthful of toast out. “Seriously?” I cover my mouth and smile. “It’s only been like a week. Trust me, she does not miss you.”

He flashes me his dimples. “We’ll see about that.” He gets ready to walk out of my room, but stops and grabs onto the frame. “Oh and Lucas left for work already. He said he’ll see you around one.”

Figures he wouldn’t say bye. “Alright… thanks.” I take a sip of my orange juice. “I’ll shower after I eat and then we can go. Sound good?”

“Everything out of your mouth sounds good.” He attempts to catch the egg in his mouth as I throw it at him. “You have a horrible aim. I’m going to go downstairs and work out for about twenty minutes and then take a quick shower. I’ll shower downstairs so I don’t slow you down.”

Eyeing his body up and down, I swallow, remembering the dirty sounds coming from the downstairs shower last night. I tried so hard to block them out, but it was pretty hard to miss. I have to admit that hearing Alex fuck, both turned me on and bothered me at the same time. A part of me wanted to imagine myself taking her place, while the other part wanted to pretend that I wasn’t imagining it at all.

Then Lucas came up here saying dirty things to me about Alex… once again, turning me on so bad that I practically knocked him down and jumped on his dick. We had wild, meaningless sex, and then I sent him down to his room. Sleeping in the same bed as Lucas is something that I haven’t done yet. I’ve only slept next to Alex, and for some reason… I want to keep it that way for now.

“Sounds good. We can take your truck.” I smile while taking another bite of food.

“You just can’t get enough of my awesome driving, can you? You like it fast and wild.” He winks. “I like that.”

I point my fork at him. “Just hurry up so we can get going.”

“Sure thing, babe.” He dodges out of my room, leaving me grinning from ear to ear. He always has a way of making me smile. I honestly don’t know what I would do without him.

Victoria Ashley grew up in Rockford, IL and has had a passion for reading for as long as she can remember. After finding a reading app where it allowed readers to upload their own stories, she gave it a shot and writing became her passion.

She lives for a good romance book with tattooed bad boys that are just highly misunderstood and is not afraid to be caught crying during a good read. When she’s not reading or writing about bad boys, you can find her watching her favorites shows such as Sons Of Anarchy, Dexter and True Blood.

She is the author of Wake Up Call, This Regret, Slade, Hemy, Cade, Thrust, and Get Off on the Pain. Victoria is currently working on more releases for 2015.