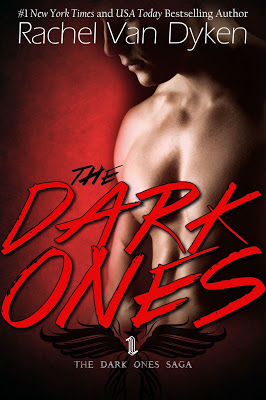 To touch a Dark One is death.

To talk to an immortal is suicide.

Yet, I’ve been marked by both.

And the King of the immortals.

My life is no longer my own.

And now I know the truth, my life was never mine to begin
with.

It’s always been theirs.

The Dark Ones by Rachel Van Dyken
My rating: 5 of 5 stars

This book was a first for me. Rachel Van Dyken has popped my cherry into the world of vampire romance. PNR isn’t my usual sub genre, but when I saw it was a Rachel Van Dyken novel, I knew I just HAD to read it and this story did NOT disappoint.

I loved the whole concept to this story line. The fact that so many paranormal beings were the norm in this reality. With a current time line, we see that immortals are the top of this society’s hierarchy and humans are raised and taught to serve, on the off chance, they’re called. It’s been 50 years since the last human was called up so life has been going on like normal. Starbucks and iPhones are representative of how normal life is.

But when Genesis is called up… a world and life she wasn’t prepared for, shows her that the knowledge she was raised with was all lies and from the start, sweet Genesis is thrust into the unknown and caught in the middle of a feud that’s been going on for centuries.

Amidst the confusion and suspense, Genesis finds a passion and love she could never have expected and learns that it a love she’s willing to give up everything for.

The characters were interesting. Genesis was the sweet human with a pure heart, Cassius is a Dark One and the King of the paranormal. Ethan, is the hauntingly tortured Vampire still recovering from heart break years after it happened. Mason, a vegetarian werewolf with the constant need to feed their new resident human and spends a lot of time in the kitchen. Then you have the sibling sirens. Alex is the ultimate comic relief. He enjoys cracking human jokes, flirting with Genesis to get a rise out of her new mate and generally keeping the atmosphere light. Then there’s Stephanie, she much more mellow than her sibling and enjoys the fact that she’s no longer the only female in their household.

I can’t wait to read the stories for the rest of the characters. They were such a great group that gave this story such a well rounded feel of suspense, passion, love, comedy and friendship. The Dark Ones had everything needed for an amazing story.  View all my reviews 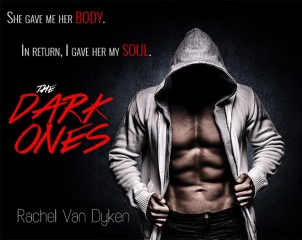 I didn’t open my eyes. “No staying in bed all day?”

“About that…” Ethan sighed. “The good news is it will feel like we’ve been in bed for days when really it could have been mere hours.”

“Yes,” I whispered, my mouth finding his.

With a groan, he pushed me back against the mattress and loomed over me, his naked body glorious-looking against the sunlight streaming through the window. “Perhaps we’ll stay a bit longer.”

“You were pleased at least four times last night, possibly five, if we count the time I—”

“Shh.” I put my hands over his mouth.

He smirked. “Afraid the dust will hear?”

I rolled my eyes.

“Ethan!” Alex’s voice boomed on the other side of the door. “Feed her!”

The knock got louder. “For the love of God, she’s human. Give her food.”

“He’s a siren. He knows nothing.” Ethan continued kissing me.

“Mason will break down the door if he has to.” Fighting broke out in the hall. “Ethan, I can smell the sex from here. One immortal to another, feed her before you can’t feed from her anymore.”

Ethan growled and pulled back from me. “They have no manners.”

I was half-tempted to cover my face with my hands. Had they heard us? Of course they’d heard us, and they knew, and they could… Yeah, I wanted to crawl under the bed and hide for a few days. Instead, Ethan pounced from the bed, put on a pair of jeans, and jerked open the door while I tried to hide beneath the covers.

I had no choice but to wave back and hope that I wasn’t as red as I felt.

“Horrible joke,” Mason said next to him. “I made eggs. She’s going to need food. Make her eat everything on the plate and—”

He was still talking when Ethan slammed the door in his face and brought a giant plate of food over to me.

“Forgive them.” Ethan scowled. “There aren’t typically secrets between us, and they’re just concerned for you.”

I pointed at the eggs, ten slices of bacon, and toast. “Clearly, they don’t want me to starve.”

“Wolves.” Ethan looked heavenward. “He should be more concerned with his own diet, the ass.”

“It does smell good.” I moved up the bed so I could lean against the headboard. “Do you eat?”

Ethan’s lips curved into a predatory smile. “I ate several times last night. Care for me to refresh your memory?”

“So tempting.” He reached for a piece of bacon and held it to his lips, taking a small bite that had my entire body clenching to keep from reaching out and attacking him. “And yes, I can eat. I typically do eat but haven’t been because when we drink, we don’t need normal food.”

“But before me…” I grabbed a piece of toast. “You were eating normal food.”

“Your taste…” His eyes brightened. “…is unlike anything I’ve ever had.”

“Stop it,” he hissed and looked away. “Damn, I can’t watch you eat. I’m going to shower while you eat your entire plate as per Mason’s orders, and then I’ll contemplate letting you leave this room so you can go to the bookstore.”

Ethan burst out laughing. “It’s eight in the morning. He’s expecting you when I drop you off. No sooner, no later. You won’t get fired. He wouldn’t dream of it, and you really are adorable.”

Ethan winced. “You may be that way for a few days.”

“Too much vampire blood makes you overheat a bit.” He shrugged. “It won’t turn you— You’re very much human, like I’ve said before, but sometimes the vampire blood causes a type of burn to take over in your bloodstream, not painful, just not exactly pleasant if it’s a hundred degrees outside.”

“Good thing it’s Seattle.” I bit into the toast.

“Yes, well, I imagine at this point, raindrops would simply turn to vapor if they landed on your skin.”

“Shower.” He nodded. “I’m going to turn around now and walk away.”

“Apparently, that’s what I do when I can think of nothing more than ripping that sheet from your body, slamming you into the nearest wall, and possessing you all over again.”

I dropped the toast.

He growled, taking two steps toward me, then swore and turned back around.

“Have a good shower!” I called.

Another growl was his answer, and then his jeans went flying. I wasn’t laughing anymore.

Rachel Van Dyken is the New York Times, Wall Street Journal, and USA Today Bestselling author of regency and contemporary romances. When she’s not writing you can find her drinking coffee at Starbucks and plotting her next book while watching The Bachelor.

She keeps her home in Idaho with her Husband, adorable son, and two snoring boxers! She loves to hear from readers!

Want to be kept up to date on new releases? Text MAFIA to 66866!
You can connect with her on Facebook or join her fan group Rachel’s New Rockin Readers. Her website is www.rachelvandykenauthor.com