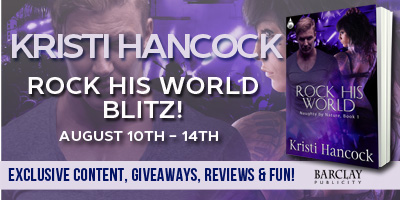 Rock His World by Kristi Hancock

ROCK HIS WORLD by Kristi Hancock is a scorching hot erotica that gives new meaning to the words, “Rock and Roll.” In this naughty tale of sexy nerd meets punk rocker, the bad girl and the good boy burn up the music sheets and turn up the volume—all the way to mind blowing. If Mari Carr’s Sugar and Spice was music to your ears, you’ll get rocked, HARD, by Rock His World. 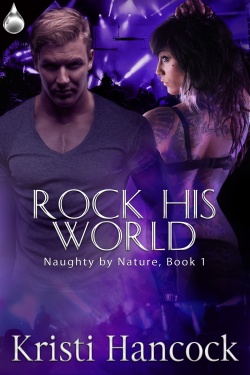 Sasha Ford lives life her way. Tattooed, pierced, and professionally satisfied, the Seattle music-lover has found her groove. She’s living her dream as a free-spirited graphic artist, but the fearless vixen has grown bored with her booty-calls and is on the prowl for a new conquest. Her trademark black eyeliner and scarlet lips serve as both invitation and warning to any man she pursues.

Seven years of college transformed small-town bad boy Avery Kingston into a super-geek. New to the city with his shiny PhD, he struggles to find his social identity by connecting with his tough guy roots. Attempting to merge his past with his present in the counter-culture, he finds himself in over his head—especially when sexy Sasha drags him into her world of mosh-pits and after-parties.

Sasha only expects a one night stand, but their searing chemistry leads them in a direction she’s less than comfortable with. Confronted with the female version of who Avery thought he could be, Sasha’s sexual advances bring out a carnal need to give as good as he gets. Sasha believes she can’t maintain her own identity if she’s in a serious relationship, but Avery wants more than sex from his hot rebel. He must convince her of his love and respect for her fierce independent streak or say goodbye to her forever. Is Avery strong enough to make Sasha break her own rules?

Rock His World by Kristi Hancock
My rating: 4 of 5 stars

Hot & heavy from start to finish!

For a quick read, this story has so much. When I say Hot & Heavy, I’m mean it. What was supposed to be a one night stand turned out to be something more that couldn’t be ignored.

Avery has just moved to Seattle and is looking to get settled and find his place where he can be himself. A computer science über geek that can only be described as a James Dean hunk with the brain of Big Bang Theory’s Sheldon. Not only is this quiet and sexy hottie super smart; but he REALLY has the talents to satisfy a lady. He’s strong when he needs to be and has the sweetest heart you could want. He was the perfect package.

Sasha was a spitfire. Living her life in Seattle’s party scene she loves her life the way she wants with no apologies. She’s takes in the same views about casual sex as any guy would and likes to enjoy herself to the fullest and meeting Avery was the start of something she wasn’t looking for and certainly didn’t expect.

That one night turns into a whirlwind romance that draws you in from the beginning. This as such a great story with wonderful characters.
View all my reviews

“I’m Sasha.” The perky voice came from his right.

Of course she was. A woman who looked like that couldn’t not have an exotic name. Shorter than him with hazel eyes rimmed in onyx, she stared up from under a shaggy mop of blue-black hair. Small silver hoop earrings spanned the edge of her left ear from lobe to tip. Her off-the-shoulder black knit top showcased tattoos covering the length of her right arm. Black skinny jeans disappeared into her scuffed Doc Marten boots—the fashion version of what he purchased at the Army Surplus store. Her vibrant red lips practically begged him to nip at them, and his pulse thrummed with a mix of testosterone and adrenaline.

“I’m Avery.” He wondered how he missed the woman as she approached him. She studied his eyes. “You like punk?”

“Usually. I’ve never heard Schlong, but the club’s website said it was a bucket-list band.”

“Most of the shows here are memorable, but they’re one of my favorites.”

“Why?” A geek in a wanna-be modern James Dean facade, it was his favorite question.

“Hmmm. Their music is sort of like a punk-funk mix, plus the band really interacts with the crowd. The energy is infectious and great to dance to, but it’s not your typical mosh pit. It’s,” she paused, “happier.”

Avery hadn’t been able to hide his widening eyes at the term “mosh pit”—the white water rapids in a river of dancing bodies could suck you under and leave you fighting your way out of the turbulence. He had never been in one but with stories of lost footwear and bloodied noses, so the concept of a “happy” mosh pit lay beyond his comprehension.

The opening band had finished their set and was breaking down their gear. The countdown clock ticked on their conversation time.

Sasha continued, “Where are you from?”

“Technically, an hour outside of Portland.” Where he had been the biggest fish in their tiny pond of bad boys. And had absolutely nothing on the people in Seattle, including the woman beside him.

“Cold. Very cold. I was thrilled to move here for the rain.”

“You have no idea. I would rather spend the rest of my life wet and in above freezing temperatures than to shovel snow one more winter.”

“I can’t imagine. This is the first place I’ve lived that didn’t have bikini weather. But I love it. The people are so real and accepting.”

Avery nodded politely since he hadn’t been in town long enough to tell.

Sasha tilted her head. “I think I might like you.” She reached up on her toes, gave him a peck on the lips, and traipsed off toward the stage where Schlong tuned their guitars and tested their bass and drums.