It’s Christmas in July with the Brothers of Rock by Karolyn James. Get the entire series half off!

Coming off tour, lead singer of Gone by Autumn – Ryan Rasoner – plans to finish a new song, take a few shots of whiskey, and then invite a woman over for a no-strings-attached one night stand. In that order.

Running into a beautiful woman at the club that night gives Ryan everything he needs. And maybe more.

Raine Meadow’s reporting career is at a standstill until news there’s a hot story in town revolving around an even hotter rockstar lead singer and his strung out, murderer of a father who is getting out of prison. This story can make her career… so bumping into Ryan is all part of her plan…

Feelings grow, as does the story, and soon both rockstar and reporter are faced with questions of fate and love in this sexy, gritty rockstar romance novel. Just how much is the story ofa lifetime actually worth?

She takes the stage to be a backup singer… only to steal the spotlight of a rockstar’s heart.

Gone by Autumn guitarist – Tanner Ashwind – maintains the rockstar lifestyle by following two very simple rules. First, the band and music is everything. Second, any woman lucky enough to share his bed never shares it twice.

It’s simple and it keeps him out of trouble… until the band agrees to hire backup singers.

Jules Sarren is desperate for a gig. Waiting tables isn’t cutting it and the mounting guilt of leaving home makes her wonder just how far off the beaten path she is in life. With nowhere else to go, she takes a leap of faith and never expects to end up singing backup for Gone by Autumn. The first show is wild… too wild… and Jules is caught in an unruly crowd until sexy guitarist, Tanner, grabs her hand.

Rules are broken, confessions made, and the band faces their greatest challenge yet when Tanner’s feelings and secrets are exposed. Teetering on destroying Gone by Autumn’s big break, can Tanner find peace in the band he loves or will he give it all up for the woman who makes him see life after the stage?

A rockstar, a brokenhearted woman, and one short lived weekend…

Gabe Anselle – bassist for Gone by Autumn – doesn’t do memories. He lives for moments. It’s easier to live life through the shows, tours, parties, and one nighters and forget them the next day. Because nothing can hurt him that way.

Sabrina Penten is a hopeless romantic. Which always leads her down a dark and lonely road. After being dumped by her latest boyfriend, she takes what’s supposed to be a sexy weekend away together and goes alone… or so she thinks. The guy staying in the next room to her has a wicked smile and enough bad boy grit to make a good girl like Sabrina want to have some fun… for once…

The weekend is short lived, but the feelings are not. When the opportunity to meet up comes again, Gabe can’t believe how excited he is to make memories with Sabrina. But when the damaged rockstar opens his heart, will his dark past threaten their bright future?

She shouldn’t cross the line with him… because if she does, this rockstar is going to destroy her… and possibly save her at the same time…

Gone by Autumn guitarist – and resident bad boy – Asher Acen, is still reeling from the aftermath of an accident. With rumors swirling of what caused the accident, all he wants to do is crash in his bed with a woman looking for nothing but fun.

After a show, getting some fresh air, he hears the screams of a woman in danger. And his life changes forever.

Nothing in Jocelyn’s life is in her own control. From her successful company to her personal finances, to her relationship, it’s all controlled by someone else… and she can’t remember how she got herself in this position. When it happens again at a club, the last person she expects to save her is a guitarist with a troubled tabloid history.

What begins as a fun and risky love affair soon turns serious. The press is on Asher’s back and Jocelyn knows her entire world is about to crumble. Once their secret is exposed, they’re both left with a tough choice in this wild rockstar romance novel that asks, can love truly fix all that is broken?

From the second Gone by Autumn drummer Blake met Maya, he’s loved her. He’s kept a close eye on her heart for years, desperately wanting to cross a line they swore they never would again.

The band is gearing up to hit the road and Maya is with someone else… leaving Blake wondering if he has waited too long.

Maya has herself convinced that she can survive her rocky relationship because nothing – absolutely nothing – can ever happen with Blake. She knows what she wants, but the risk ofgoing after it may be just too much to handle.

With one phone call Blake and Maya are suddenly thrust together… finally alone… finally opening up about the past. Although Blake has rocked millions of fans on stage, there is only one person he wants in his audience for the rest of his life. Will opening old wounds close the door on their future? 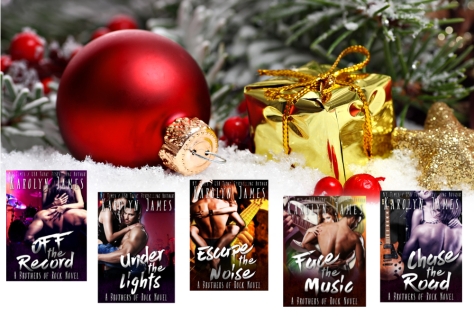 Karolyn James is the NY Times and USA Today Bestselling author of several romance series, including the Brothers of Rock series and the upcoming Ferry Creek contemporary romance series…