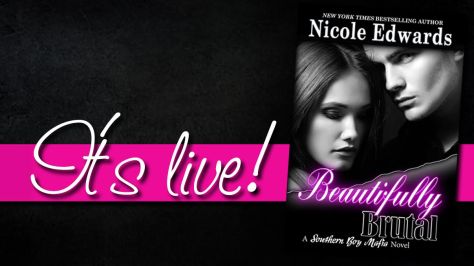 Sometimes the only way to describe it is beautifully brutal.

If you think you know him… You’re wrong.

If you think you know his family… Wrong again.

If you think you know his story… You don’t.

If you did, you’d likely wonder how the hell a man like Maximillian Adorite managed to make it to this point in his life. At twenty-nine, he’s experienced more than most people could only ever imagine, all thanksto his family. Organized crime they call it. Mafia.

No matter how they spin it, it comes down to one thing. Max gets what he wants. Except for the one thing he wants most.

Her name is Courtney Kogan.

And now that he’s had a taste of her, Max knows he’ll never be able to let her go.

The Southern Boy Mafia series is a spinoff from the Sniper 1 Security series. It has been set up to be read without reading Sniper 1 Security, however, the characters will frequently cross over.

Courtney spun around, her gaze slamming into his.

“Check on me? Why the hell would you wanna do that?”

Because it was an excuse to see her. But that wasn’t what Max told her. “I wanted to make sure you were all right.”

Courtney huffed as she returned to pouring the vodka into a glass, adding 7-Up from a can sitting on the table. Max’s gaze instantly strayed to the extra glass, and his frustration rose again.

She tossed him a glare over her shoulder. “Oh, you’re referrin’ to when you blew some guy’s brains out in the middle of your office? Don’t you have a dead body to clean up or somethin’?”

He didn’t say a word. His rule was that he’d never own up to anything. He didn’t feel safe anywhere that wasn’t home, never knew when someone was trying to trap him. And of all people, Max wasn’t delusional enough to believe Courtney wouldn’t turn on him with the right motivation. Ultimately, she was one of the good guys. And that was why they never had been able to find a middle ground. It was more difficult than it appeared considering they were at opposite ends of the spectrum—middle ground was just too far away for either of them.

Not to mention, arguing with Courtney was moot. Max knew from experience that she would never let up, which was why he’d given up long ago.

“Oh, right. You have people for that,” she continued, turning to face him again before taking a sip from her glass. “I’d offer you a drink, but then you might think you can stay.”

“I’m gonna stay,” he informed her.

“You’re not gonna stay,” she retorted, her tone clipped. “Not today, not tomorrow. Not ever.”

Max shrugged out of his leather jacket, folding it across the arm of the sofa as he moved closer.

“I’m serious, Max,” Courtney said, her eyes widening as she backed up until her ass hit the table. “You’re not stayin’. RT’ll be watchin’ my house until you leave. It’s not an option.”

Max continued to stalk her slowly until he was standing only a few inches away from her. Unable to resist, he cupped her face in his hands, enjoying the silky smoothness of her skin against his palms.

Courtney shook her head, opened her mouth, but then snapped it closed. She wanted to argue; it was evident in the lines that creased her forehead.

Leaning forward, Max tested the waters, allowing his lips to brush hers lightly. Even that was nearly more than he could handle. It’d been too damn long since he’d touched her, tasted her, loved her. And fuck if he didn’t want to do it all again. Right here. Right fucking now.

“Do what?” he questioned roughly, pulling back and allowing his eyes to slide over her beautiful face, down the slender column of her neck, where he noticed the rapid thump of her pulse.

“We’re through,” she stated, her tone holding a hint of conviction.

“So you’ve said.” In fact, Courtney had told him they were over many times during the year they’d been together. And for the year that followed, right up until this very moment, Max had thought about her every single day, about the way she’d ended things so abruptly the last time. Didn’t matter that he’d called her bluff and that had technically been the reason they’d gone their separate ways.

Had it not been for the crazy shit he had to deal with on a daily basis, he might’ve actually taken the time to play her games. But there was another problem with that. He was fucking tired of playing, which was the only reason he’d allowed her to walk away then.

And that was the real reason he was there tonight. He wanted to know whether or not this was truly over. For him, it wasn’t. There wasn’t a chance in hell that he’d ever be able to get over her. Probably not in his lifetime. But that didn’t mean that moving forward wasn’t possible. With or without her.

If she didn’t want him, he’d move on. He had business arrangements dangling in the wind, one in particular that was entirely dependent on where he stood with Courtney.

“Tell me you want me to leave, Courtney. Tell me to go, and I’ll never darken your doorstep again. You’ll never have to see me.”

Max could see the surprise in Courtney’s eyes, in the way her throat worked when she swallowed hard. He’d never made her that promise, never told her that he’d willingly let her go, although he’d spent the last year staying away from her. He’d had eyes on her the entire time; he knew every single move she’d made during those months. He knew for a fact that Courtney had never brought another man home with her, nor had she ever gone home with a man. Had she made that choice, Max wasn’t sure how things would be at this moment, but more than likely, there’d be another dead asshole buried six feet under.

The point was, she hadn’t.

“Tell me that’s what you want, and I’ll do it, Courtney. But know this … if you send me away this time…” Max took a deep breath, exhaled. “I won’t come back. Whatever this is between us, it’ll never die, never go away completely, and we’ll both have to live out the rest of our lives with the decision that you make right here. Tonight.”

The pause that followed stole the air from the room. 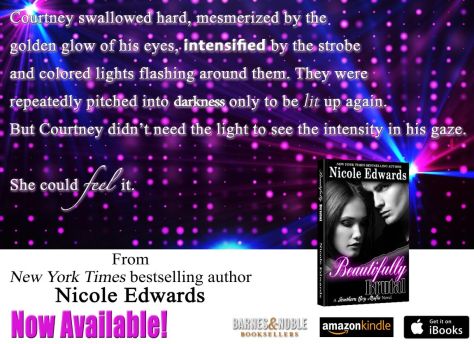 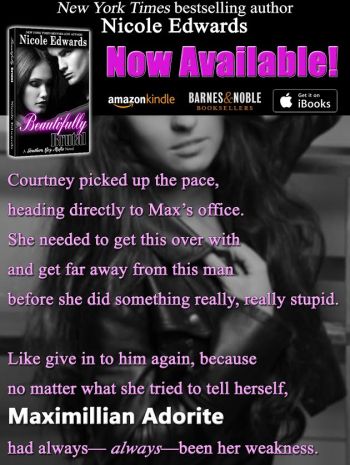 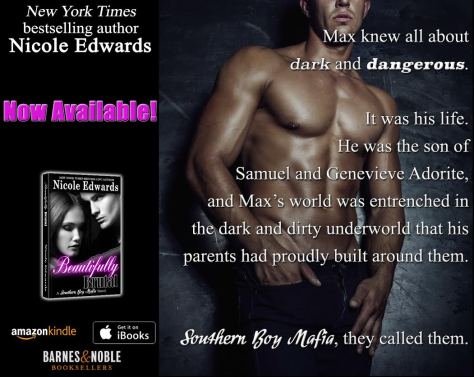 A portion of the JUNE proceeds from ALL of the Club Destiny series will go to the Keith Milano Memorial Fund, benefiting the American Foundation for Suicide Prevention.

New York Times bestselling author Nicole Edwards launched her professional writing career in July of 2012. Having been an avid reader all of her life and a huge fan of creative writing, it seemed the likely path for her to take. Since then, she has released fifteen books and has no plans to stop. As her full-time career/hobby, Nicole writes steamy contemporary and erotic romances. Nicole is a New York Times and USA Today bestselling author who was born and raised in Texas. Married with three kids and four dogs, she has plenty of interaction to keep her imagination brewing. Her books have been featured in USA Today’s Happy Ever After segment as well as Indie Reader’s best seller list. She has forged her way as an independent author. Although she has a bachelor’s degree in Human Resources, she prefers to be hiding out in her writing cave, talking to the fictional characters that have built up in her head over the years. When she isn’t writing or plotting her next book (sometimes translated to “playing on Facebook”), Nicole loves to read and spend time with her family and her dogs. http://nicoleedwardsauthor.com/