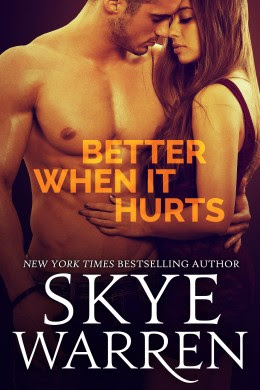 Five years ago we lived in the same house. He was the ultimate bad boy. And my foster brother.

Now he’s back. Tougher, harder, meaner. All of it aimed at me, because I was the one who sent him away. It’s payback time. He wants his pound of flesh, and I am helpless to say no.

Books in the Stripped series
½. Tough Love (prequel)
1. Love the Way You Lie
2. Better When It Hurts
3. Pretty When You Cry

Praise for the Stripped series by Skye Warren:

“It’s gritty, edgy, and sexy, served to you in the well-written, absorbing style that Skye is so talented at delivering. I can’t wait to get my hands on the rest of the Stripped series.” – Shameless Book Club

“A jagged, layered and enthralling adventure that weaves darkness and light with precision and purpose.” – the lusty literate

“It’s dark, mysterious, sexy, and I loved every page of it! There were twists and turns that I never saw coming! I love when an author is able to keep me guessing until the very end of the book.” – Book Fancy Book Blog

“Love The Way You Lie was heartwarming, exhilarating and tantalizing with just the right tinge of darkness.” – Warhawke’s Vault

I try not to scan the floor when I enter. There’s already a buzz in the air, the hunger and desperation of a strip club on Saturday night. I’m ready to earn money, ready to move my body.

He’s nowhere in sight, and I breathe a sigh of relief. A group of men are still gathered near the railing. They’d tipped me pretty well while I was up there, so I figure I have a good shot at a lap dance. I saunter over, my breasts barely contained in the red bikini top, my skin coated in sweat and glitter and the thick smoke of this place.

“Nice set,” says a low voice from behind me.

I turn to see Blue standing there, arms crossed so his muscles bulge, lids lowered in that intense way of his. Shit. “Thanks,” I say, but the only thing I’m really thankful for is that my voice doesn’t shake.

He’s the head of security at the Grand, which should make me feel safe. Except we have a history. And he hates my guts. So there’s no affection in his eyes when they scan me up and down. No kindness in his voice when he adds, “You look great.”

The way he says it, it sounds like a threat. He makes me feel like the scared little girl I used to be when I knew him before. And him? He’s like the big bad wolf, sizing me up before he swallows me whole.

I force myself to shrug at him, to toss my hair. “Thanks, sweetie.”

He circles me, surrounding me. “But then, you always look great. That’s what you like, isn’t it? Having men panting after you? Leading us along by our dicks?”

My throat gets tight. I know that’s what people think of me. They take one look at my lipstick and my short skirt and assume the worst. God, they’re right. But it’s worse to hear it from him. Worse because he once believed in me. “Do you expect me to apologize for earning a living?”

His lids lower. “Not for that.”

I can’t meet his eyes. I know exactly what he wants me to apologize for. And he’ll never believe me. Even showing weakness in this game is enough to get me killed. “I don’t apologize to anyone.”

“Of course you don’t,” he says, his voice full of loathing. “But I don’t want your words.”

I can’t help but whisper, “What do you want?”

That makes him smile. It’s not a nice smile. “I think you know the answer to that.”

He wants to hurt me, to use me. He wants to fuck me. I swallow hard. “That isn’t for sale.”

“I wasn’t planning to pay you.”

This should be easy. Tell him no. Make him believe it. I’ve done this for a thousand men before. Somehow he’s different. Maybe because I don’t really believe it myself.

I know he’s watching me. I know he’s hatching his plans. My heart speeds up every time I turn away from him, wondering if this is the time he’ll pounce. One of these times, he’s going to dig into me with his teeth and his claws. He’s going to hurt me, and I’m not sure I’ll survive it.

Not tonight, though. Not now.

I take a step away from him. “If you aren’t going to pay for my time, I think I’ll find someone who will.”

His eyes darken. “Your call, gorgeous.”

I hear the unspoken message beneath his words, steel under velvet. For now.