Cassidy Whalen is as determined as they come. An Irish girl from a small fishing village, she worked hard to pursue her love of American sports and land her dream job as a sports agent with a major agency in LA. Unlike her colleague, Shaw Matthews, who believes you should work smarter, not harder. Although it’s assumed Shaw comes from money, he doesn’t. What he did inherit was a genetic gift of charisma, and he used it to his advantage, establishing connections at an early age that helped him climb the corporate ladder. He’s arrogant and used to getting his way with women, but he’s met his match with Cassidy, who’s out to prove that anything he can do, she can do better.When a partnership position with Striker Sports Entertainment is up for grabs, Cassidy and Shaw are in a head-to-head competition to snag the most sought-after athlete in the country. Let the games begin! Playing their sexual strengths against the other’s weaknesses leads to an affair that takes the competition . . . to their offices, the co-ed bathroom, the boardroom, the supply closet, the elevator, and anywhere else they’re given the opportunity. But before long, they’re left wanting much more than to one-up each other in just the boardroom; they want to out-do each other in love, too.

Playing Dirty by C.L. Parker
My rating: 5 of 5 stars

There’s a thin line between love and hate and Cassidy & Shaw tread that line from start to finish! It’s been a while since I’ve read something with so much angst.

Cassidy and Shaw are fierce competitors and their both assigned with the task of signing a big time NFL player in order to win the coveted spot at a partnership in the agency they work for.

Both equally feeling they deserve it, they start pulling all the punches they can muster. The banter between the two of them was extremely entertaining. The barbs they spat at each other oozed nothing but the distaste they had for each other.

With all that animosity, they still fell victim to their attraction to each other. What started out as a test of will and power eventually ended up with them naked and going at it like angry gorillas. Hate sex can be just as satisfying, right? Apparently, that worked for them so they fell into that cycle any time they were alone. What started out as a one time- don’t you say anything to anyone- became a you want this as much as I do.

I loved these two. Each trying to one up the other at every turn only fueled that fire raging between them.

Exceptionally written and with characters I enjoyed this was definitely worth five love-to-hate stars.
View all my reviews 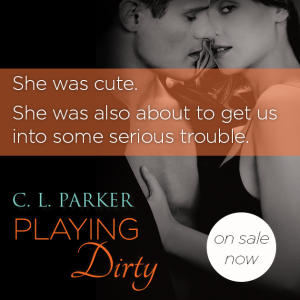 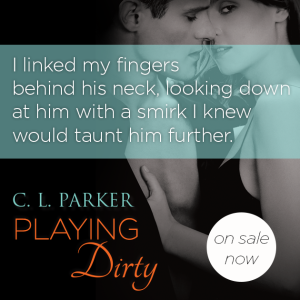 C.L. Parker is a romance author who writes stories that sizzle. She’s a small-town girl with big-city dreams and enough tenacity to see them come to fruition. Having been the outgoing sort all her life—which translates to “she just wouldn’t shut the hell up”—it’s no wonder Parker eventually turned to writing as a way to let her voice, and those of the people living inside her head, be heard. She loves hard, laughs until it hurts, and lives like there’s no tomorrow. In her world, everything truly does happen for a reason.