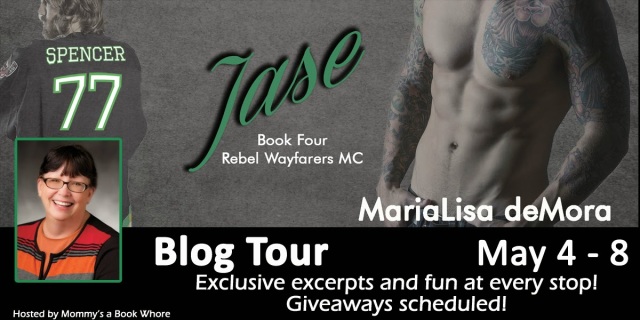 Good-looking and ripped, the man has moves, on and off the ice. But, he’s also jaded and alone, and tired of living out of suitcases.

For as long as he can remember, hockey has ruled his life. He’s chased pucks across more than a dozen countries, and had his pick of women in any town he visits.

Then he met HER. And now, he’s about to turn his life upside down because of HER. Because he can’t get the one night of passion he shared with a smokin’ hot biker babe out of his head. Unfortunately, DeeDee wasn’t interested in anything long term, and she’s gone before he’s ready.

Life becomes complicated and difficult when Jase is traded to another team, and as he tries to settle in his new hometown, everything seems to conspire against him, determined to go wrong.

Dancing around their mutual attraction, one day he and DeeDee find themselves face-to-face and body-to-body, but will they be able to set aside their past pain and focus on the future they could make together? Can he make her reconsider her relationship fears and trust him?

Jase is on a mission to show her what they have together is worth fighting for, to convince her to take a chance on him. His attempts will bring him squarely into the path of a motorcycle club, earning him the attention of Mason, president of the Rebel Wayfarers MC.

You miss 100% of the shots you never take. – Wayne Gretzky

Copyright MariaLisa deMora 2015
From chapter 10, Broken things
“DeeDee, wait,” he called as he ran to catch up with her, settling into a fast walk beside her as they moved across the lot towards fan parking in the front. “Wait,” he said again, reaching out a hand to touch her arm. She stopped so suddenly he stumbled and had to turn around, having passed her with his long, hurried strides.
“Hey,” he said softly. Looking into her face, he saw the glint of tears on her lashes and his heart clenched. Blinking furiously, she swallowed and lifted her chin, meeting his gaze straight on.
“Hi, Jase,” she said cheerfully, as if she hadn’t just been about to cry.
He took a long look, drinking his fill of her. He hadn’t seen her in six weeks. Six long weeks, and Jase saw she had lost back the little bit of weight she gained when they were together. He thought she looked too skinny again, beginning to lose the soft curves he loved. Arms crossed over her chest, she had her fingers tightly wrapped around her biceps, the tension in her hands giving lie to the smile on her face. He lifted a hand to stroke her cheek and she stepped back, out of reach, her reaction twisting his heart in his chest again. What? She can’t even stand my hands on her now?
“You came to the game?” He didn’t know what else to say, what to ask. He knew what he wanted: he wanted her to come home with him, let him wrap her up…let him love her. His mouth was full of those words, his tongue frozen with fear. God, just having her this close was good, and he didn’t want to do anything to send her running again.
“Yeah, the radio station gave me some tickets for advertising the club.” Smiling politely, she took another step back and to the side, trying to shift around him but he moved with her.
“Oh, promo tickets. Nice. Were they decent seats?” Doesn’t she know I’d get her tickets to every game if she wanted? He should do that anyway, have them at the ticket office for every home game. That way he would know by looking if she was in the arena.
“Yeah, on the glass behind home net. You played a lot.” The first hint of a real smile crossed her face. “You look good.”
“The team seems to suit me,” he agreed. “You look good too, baby.” Crap, he thought when he saw her flinch as if slapped when the endearment slipped out. Don’t do that again, man.
“It’s good to see you, Jase,” she said, stepping back again. Clearly preparing to leave, she shifted further around him and he turned to track her movements.
“DeeDee,” he was frantic now to keep her talking, keep her here…keep her. Casting around for a topic, he latched onto the most recent thing he knew had happened in her life. “How’s Ruby?” There, look at that; her real smile is back. He relaxed minutely. I picked a good topic.
“She’s good. Seems recovered from everything. Things could have gone a different way, so we’re all glad she’s better.” Her gaze dipped then rose again, “Slate loves her.”
“Yeah, he does, eh?” He smiled, thinking about how crazy Slate was for Ruby. “It’s still a good thing between them, eh?”
She laughed, and his breath caught in his throat at the sound, bright, clear, and mirthful, so…her. “Well, Ruby’s happy, and that’s all I care about. I love seeing her smile again. You don’t know what she was like before the accident, but this is as close to that as she’s been for years.” She looked wistful, and Jase was thrown off balance that he hadn’t been with her to see all of this as it happened. He would love to be there every day. His heart twisted again and he frowned, thinking, I do still love her. I love her.
“So, how’s work?” Yeah, you’re officially floundering for conversation starters now. Next would be the weather. He groaned silently.
“Work is about the same.” She flashed him a grin. “Mercy asks about you sometimes. Said you were the shyest guy she had ever seen in a strip club. I have a new girl auditioning in a couple of weeks; she’s coming up from Florida. It’s nice. Really nice, because, for a change, everything is running smoothly, which kinda makes me want to find some wood to knock on so I don’t jinx myself.”
“Mercy’s a jackass,” he grumbled, grinning. Leaning over, he offered his head. “Here’s my thick head; you can knock on that. It’s as good as wooden.” He held the pose, looking down to watch her legs and feet, and he saw them angle as she leaned forward a second before her hand settled on his head. Her fingers delicately threaded through his hair to the back of his neck, tracing the skin there softly. Then he lost the heat of her hand as she made a fist and gently rapped her knuckles on top of his head.
Straightening slowly, he caught a look of pain on her face before she smoothed it away, plastering that damn fake smile back on. “There you go,” he said softly. “Crisis averted. You are officially un-jinxed.” Her smile faded, and an uncertain look took its place, making her look open and vulnerable. She opened her mouth to say something, when the loud clicking of heels came from across the lot behind him. Her eyes darted over his shoulder, and with a slam he could almost hear, the shutters drew across her features again.
“I have to go. It was good to see you, Jase.” She turned on her heel and walked away. 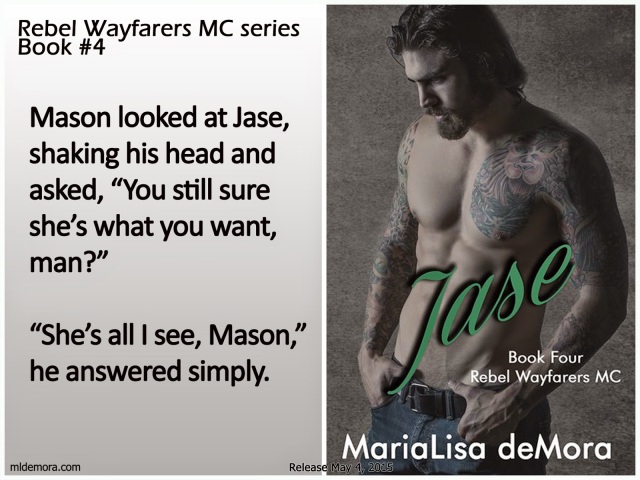 Raised in the south, MariaLisa learned about the magic of books at an early age. Every summer, she would spend hours in the local library, devouring books of every genre. Self-described as a book-a-holic, she says “I’ve always loved to read, but then I discovered writing, and found I adored that, too. For reading … if nothing else is available, I’ve been known to read the back of the cereal box.” She still reads voraciously, and always has a few books going in paperback, hardback, on devices, on napkins! Oatmeal is her comfort food. She hates gardening but loves flowers; not cut arrangements, but in the wild, outside. She has a deep and abiding respect for our military. Her dad was career Air Force, and flew during the Cuban Missile Crisis, Korean Conflict and Vietnam War. Parades make her cry. Walking Dead is about the only TV she watches anymore, don’t bother her on Walking Dead night, when she’s been known to shout, “Go Team Darryl!” Yes, she’s still sad about Firefly.She’s a hockey fan, like … a serious hockey fan. She’s loyal to the Edmonton Oilers, but asks that we don’t judge her about that. She also likes the Nashville Predators and Ottawa Senators. The local ECHL team, the Fort Wayne Komets, are a fav of hers, and she has season tickets. She’ll also generally try to hit the road games within a hundred-mile radius.She’s a wanna-be hiker, working on a “bucket list” of hikes like Knobstone (completed in four days mid-April 2014 – whoooo!), sectioning parts of the AT (51 miles in Georgia in early-May 2014), and now and then looking west towards PCT.She embraces her inner geek; MariaLisa has been working in the tech field for a couple decades. A sometime PC gamer, she still plays EverQuest after all these years. She says, “What can I say, I’m loyal (see above, I’m an Oilers fan LOL). Yes, I’ve heard of WoW, and have a coupla toons there, too.”On music, she says, “I love music of nearly any kind—jazz, country, rock, alt rock, metal, classical, bluegrass, rap, gangstergrass, hip hop—you name the type, I probably listen to it. I can often be seen dancing through the house in the early mornings. But what I really, REALLY love is live music. My favorite way to experience live music is seeing bands in small, dive bars [read: small, intimate venues]. If said bar [venue] has a good selection of premium tequila, then that’s a definite plus!”