The girl you all know as damaged. Quiet. Broken.

She doesn’t fit in. Nothing in her world feels right. She’s trapped in a spiral of darkness that seems to be consuming her day by day, until she sees nothing but an empty, black hole.

Her world is a broken place she can’t escape.

She has people around her who matter. Who love her. But it’s not enough. Not enough to break her out of the bitter despair she lives in.

He knows pain. He knows darkness. He’s sweet. He’s kind. But most of all…

Combining their demons doesn’t seem like the best plan. Everyone is against them. He deserves better. She deserves better. They’ll never work. They’re too broken. Too damaged. It’s a destructive combination that will only end in heartbreak.

But in their desolation, they will find peace. 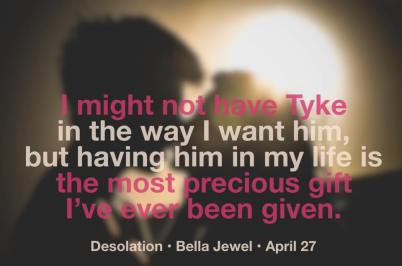 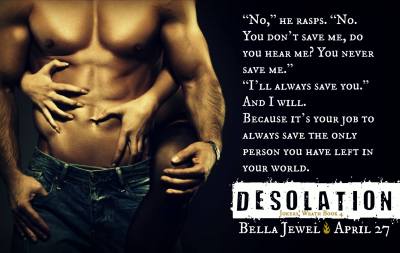 Bella Jewel is a self published, USA Today bestselling author. She’s been publishing since 2013. Her first release was a contemporary romance, Hell’s Knights which topped the charts upon release. Since that time, she has published over five novels, gaining a bestseller status on numerous platforms. She lives in North Queensland and is currently studying editing and proofreading to further expand her career. Bella has been writing since she was just shy of fifteen years old. In Summer 2013 she was offered an ebook deal through Montlake Romance for her bestselling modern day pirate series, Enslaved By The Ocean. She plans to expand her writing career, planning many new releases for the future.          Website | Facebook | Twitter | Amazon | Goodreads