Meet Taz & Lindsey is this sexy, suspenseful stand alone in the G-Men Series!

My life is finally perfect. My dreams have all come true. I’m where I want to be with the bureau; having the career I’ve been planning since I did my stint in the military. I’m married to the one and only woman I’ve ever loved; my heart beats for her alone. Together we’ve made beautiful babies that I adore. I’m thirty-three years old and I’m complete.

Then one day, it all changes. Slate recruits me for a temporary assignment that is underneath the radar for a reason. The bureau hasn’t sanctioned it as a priority, but Slate feels it is because of who is involved: Sue Ellen Reynard. Yeah, remember her?

Our lives were perfect. Taz and I had everything we’d ever hoped for: family, careers and an everlasting devotion to one another. Suddenly nothing is the same. In a single moment, my biggest fear is realized by one phone call from Slate: an ‘agent is missing’.

This is just the beginning of our long journey. Will things ever be the same again?

I wiped my hands clean, tossed the towel into the trash and grabbed my wife’s hand, pulling her behind me up the wide staircase to the second floor. Once there, outside of those closed french doors that had been my iron curtain for the past several weeks, I pushed them open, pulled her into the room with me, and then kicked them shut with one swift move.

I pulled her close, raising her shirt up and she didn’t resist; but instead, raised her arms up so that I could pull it up and over her head. I unfastened her front closure bra, releasing her beautiful tits that I hadn’t touched in months.

I lifted her up, and carried her over to the bed–our bed, gently placing her on her back, so that I could straddle her and begin feasting on her breasts.

She moaned beneath me with pleasure. I multitasked, sucking on a breast while I unfastened her jeans, before raising myself back up so that she could shimmy out of them. I pulled my shirt up and over my head, and then quickly unfastened my jeans, shedding them along with my boxers in one swift movement.

I lowered myself back over her, my mouth finding hers. I slowed my pace. I sure as hell didn’t want to come before my dick was even inside of her, but I swear to God, I knew I wouldn’t last long. I kissed her softly, playfully, as my teeth gently nipped at her bottom lip.

Our tongues interlaced, and her arms wrapped around me tightly, pulling my face and upper body even closer to her. I was consumed by her scent, her softness, her sweetness–all of it. She was mine to claim and holy fuck if I wasn’t going to! Nothing–I repeat–nothing was going to keep me from sinking my cock into her sweet pussy and showing her that she was mine–now and always.

And then we heard it.

At the same time.

From the room down the hall, Jackson was crying. And it wasn’t just a fussy or whiney cry that would likely stop so that he could return promptly to sleep.

It was a loud-ass wailing, followed by a high-pitched shriek of “Mommeee!”

Lindsey squirmed underneath me, pushing against my chest.

She launched herself out of our bed, and quickly went to the closet, pulling on her white terry cloth robe, making a quick exit so that she could tend to our son.

I made a mental note to ground his ass just as soon as he was old enough to understand the whole concept. 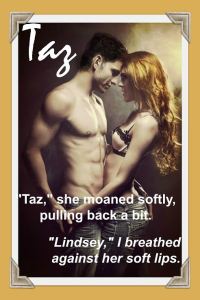 Haven’t met the men of the of the G-Men Series yet?  Now is your chance,

The entire G-Men Series is together for a limited time box set! Yes, those hot, alpha FBI agents, and their ladies, along with the spin-off characters of ‘These Men’ are packaged together for this limited time offer. This is your chance to meet Slate, Taz, Easton, Eli and Cain Maddox

I was born and raised in southern Ohio, and with the exception of a brief stint in Dallas, TX, have been an Ohioan most of my life. My dream has always been to write a novel, and back in the early eighties I tried to do just that, having been influenced by authors such as Kathleen Woodiwiss, Johanna Lindsey, Rosemary Rogers and Laurie McBain. I remember writing to all of them through their listed publishers, and the only response I received was from Johanna Lindsey (who lived in Hawaii at the time.

Ms. Lindsey advised me to continue with my dream; and to submit to various publishers again and again. Of course, at that time, publishing e-books yourself was not on the horizon; there were vanity publishing houses of course, but she advised me to avoid those.

So my dream was put on the back-burner for more than 25 years until June of 2012 when suddenly I no longer had a reason not to write a novel. My sons were grown; I found myself without a career (blessedly) and the creative juices flowed once again.

I finished my first novel, “Maybe Baby” in September of 2012; the next two books in the “Baby Series” titled “Baby Love” and “Be My Baby” were published in early 2013. I learned a lot in my first endeavor with self-publishing. I’ve made so many friends as a result that it is over-whelming.

In the spring of 2013, I had an idea for a different type of Alpha, and wrote Book #1 of the “G-Man” Series, titled “Diamond Girl.” This book was well-received, and I followed it with Book #2, “Love Plus One.” These are stand-alone books.

I am finally doing what I love and I sincerely appreciate the wonderful readers who provide feedback and take the time to comment. I hope that with each book, my writing has grown and improved as I strive to publish quality fiction.