What if everything you had come to know about your life was a lie, complete and total fiction? Charlotte West had everything she ever wanted: The house, the status and the perfect husband in Winston. But that’s the trouble with appearances; they can be deceiving. Charlotte’s life had become a tangled web of ecstasy, rules, punishment and unparalleled pleasure at the hands of Winston, and his business partner, Aiden.

Charlotte never expected Winston was harboring secrets deeper than her own. She was clan-destined to lock more away into her vault of lies in order to portray the flawless illusion that the outside world has come to expect.

On an ordinary day of no significance, Charlotte made a conscious decision to let go of the chains that were binding her together and prepared to unleash the carnage that was her soul onto the world. She no longer felt the need to please Winston, nor Aiden. She was prepared to deal with her decision. For the first time, she was going to be true to herself, and she was terrified.

But when the cover is pulled back and decades of lies, lust and deceit are exposed; the question is, who would Charlotte be when everything was exposed? Would she come out on the other side as she had hoped, would years of walking the razors edge leave her broken; or was she lost forever?

Enough Secrets by Alexis Riddley
My rating: 4 of 5 stars

Enough Secrets was definitely the most interesting read I’ve come across in a while. When I first started this story, I wasn’t sure what to think. I was a bit confused but as the story progressed, it all became clear.

This is the story of Charlotte, Winston and Aiden. Charlotte and Winston have been in love and married for years. Aiden comes into the picture as Winston’s friend and business partner. Though they’ve been married for quite some time, there is still much of Winston’s past that she doesn’t know. These secrets end up changing the dynamics between them.

The secrets and lies are so embedded in the story that I don’t want to give anything away. I can say that there was a point I thought I had figured everything out and it turned out I was completely wrong. And the ending was NOT what I expected. I was shocked…to say the least.

If you’re looking for a quick read with a twist, this is it!

*a copy was provided by the author in exchange for an honest review.

View all my reviews 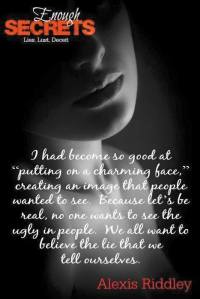 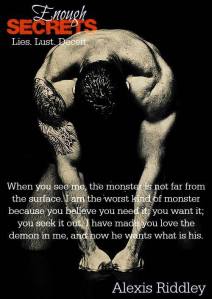 Alexis Riddley spends her day’s knee deep in the grind of corporate America, but her love of reading is what pushed her to put pen to paper. Bringing to life the stories that once existed only in her head. Alexis loves the outdoors, adventures, and music. Oftentimes music is the catalyst or the trigger for memories, and emotions that she uses in her writing. Alexis rarely watches television, but is a total comic book freak, superheroes, the whole lot of them. She is obsessed. Alexis is willing to try anything, at least once, as long as it keeps the soul free and the mind open. She is a kid at heart who refuses to let age define her and limitations contain her. Alexis is a romantic, with a twisted mind and sexy imagination. She still believes that happy endings exist, just that sometimes they do not come in the pretty packaging you may have expected.
FACEBOOK | GOODREADS